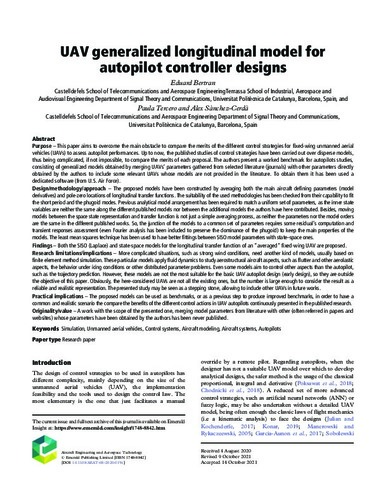 Tercero Chulián, Paula
Sanchez Cerda, Alex
Document typeArticle
Rights accessOpen Access
Abstract
This paper aims to overcome the main obstacle to compare the merits of the different control strategies for fixed-wing unmanned aerial vehicles (UAVs) to assess autopilot performances. Up to now, the published studies of control strategies have been carried out over disperse models, thus being complicated, if not impossible, to compare the merits of each proposal. The authors present a worked benchmark for autopilots studies, consisting of generalized models obtained by merging UAVs’ parameters gathered from selected literature (journals) with other parameters directly obtained by the authors to include some relevant UAVs whose models are not provided in the literature. To obtain them it has been used a dedicated software (from U.S. Air Force).The proposed models have been constructed by averaging both the main aircraft defining parameters (model derivatives) and pole-zero locations of longitudinal transfer functions. The suitability of the used methodologies has been checked from their capability to fit the short period and the phugoid modes. Previous analytical model arrangement has been required to match a uniform set of parameters, as the inner state variables are neither the same along the different published models nor between the additional models the authors have here contributed. Besides, moving models between the space state representation and transfer function is not just a simple averaging process, as neither the parameters nor the model orders are the same in the different published works. So, the junction of the models to a common set of parameters requires some residual’s computation and transient responses assessment (even Fourier analysis has been included to preserve the dominance of the phugoid) to keep the main properties of the models. The least mean squares technique has been used to have better fittings between SISO model parameters with state–space ones.Both the SISO (Laplace) and state-space models for the longitudinal transfer function of an “averaged” fixed-wing UAV are proposed. Research limitations/implications. More complicated situations, such as strong wind conditions, need another kind of models, usually based on finite element method simulation. These particular models apply fluid dynamics to study aerostructural aircraft aspects, such as flutter and other aerolastic aspects, the behavior under icing conditions or other distributed parameter problems. Even some models aim to control other aspects than the autopilot, such as the trajectory prediction. However, these models are not the most suitable for the basic UAV autopilot design (early design), so they are outside the objective of this paper. Obviously, the here-considered UAVs are not all the existing ones, but the number is large enough to consider the result as a reliable and realistic representation. The presented study may be seen as a stepping stone, allowing to include other UAVs in future works.The proposed models can be used as benchmarks, or as a previous step to produce improved benchmarks, in order to have a common and realistic scenario the compare the benefits of the different control actions in UAV autopilots continuously presented in the published research. A work with the scope of the presented one, merging model parameters from literature with other (often referred in papers and websites) whose parameters have been obtained by the authors has been never published
Description
This paper is deposited under the Creative Commons Attribution Non-commercial International Licence 4.0 (CC BY-NC 4.0, and any reuse is allowed in accordance with the terms outlined by the licence. To reuse the AAM for commercial purposes, permission should be sought by contacting permissions@emeraldinsight.com. For the sake of clarity, commercial usage would be considered as, but not limited to: o Copying or downloading AAMs for further distribution for a fee; o Any use of the AAM in conjunction with advertising; o Any use of the AAM by for promotional purposes by for-profit organisations; o Any use that would confer monetary reward, commercial gain or commercial exploitation.
CitationBertran, E.; Tercero, P.; Sanchez-Cerdà, A. UAV generalized longitudinal model for autopilot controller designs. "Aircraft engineering and aerospace technology", 16 Novembre 2021, vol. ahead-of-print, núm. ahead-of-print.
URIhttp://hdl.handle.net/2117/357181
DOI10.1108/AEAT-08-2020-0156
ISSN1748-8842
Publisher versionhttps://www.emerald.com/insight/content/doi/10.1108/AEAT-08-2020-0156/full/html
Collections
Share: