Cluster of emerging technology: evaluation of a production HPC system based on A64FX 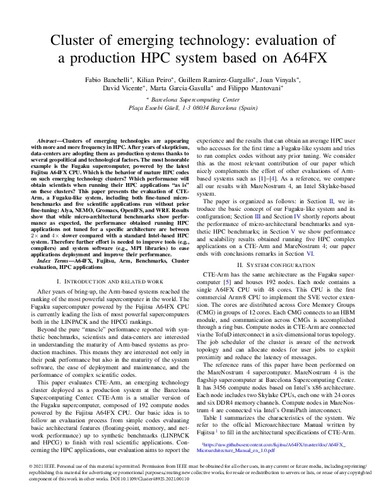 Document typeConference report
PublisherInstitute of Electrical and Electronics Engineers (IEEE)
Rights accessOpen Access
European Commission's projectPOP2 - Performance Optimisation and Productivity 2 (EC-H2020-824080)
Abstract
Clusters of emerging technologies are appearing with more and more frequency in HPC. After years of skepticism, data-centers are adopting them as production systems thanks to several geopolitical and technological factors. The most honorable example is the Fugaku supercomputer, powered by the latest Fujitsu A64FX CPU. Which is the behavior of mature HPC codes on such emerging technology clusters? Which performance will obtain scientists when running their HPC applications “as is” on these clusters? This paper presents the evaluation of CTE-Arm, a Fugaku-like system, including both fine-tuned micro-benchmarks and five scientific applications run without prior fine-tuning: Alya, NEMO, Gromacs, OpenIFS, and WRF. Results show that while micro-architectural benchmarks show performance as expected, the performance obtained running HPC applications not tuned for a specific architecture are between 2× and 4× slower compared with a standard Intel-based HPC system. Therefore further effort is needed to improve tools (e.g., compilers) and system software (e.g., MPI libraries) to ease applications deployment and improve their performance.
CitationBanchelli, F. [et al.]. Cluster of emerging technology: evaluation of a production HPC system based on A64FX. A: IEEE International Conference on Cluster Computing. "2021 IEEE International Conference on Cluster Computing, Cluster 2021: Portland, OR, USA, 7-10 September 2021: proceedings". Institute of Electrical and Electronics Engineers (IEEE), 2021, p. 741-750. ISBN 978-1-7281-9666-4. DOI 10.1109/Cluster48925.2021.00110.
URIhttp://hdl.handle.net/2117/357083
DOI10.1109/Cluster48925.2021.00110
ISBN978-1-7281-9666-4
Publisher versionhttps://ieeexplore.ieee.org/document/9556051
Collections
Share: