Resilience and urban regeneration: lessons from community-led initiatives: the case study of Can Fugarolas in Mataró (Barcelona) 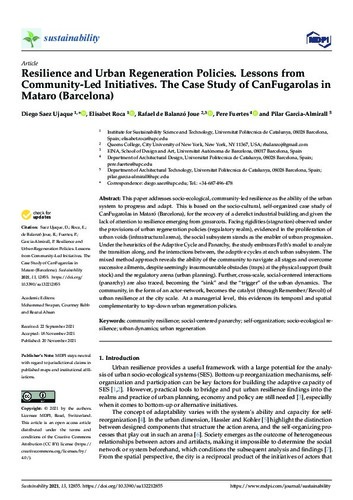 Document typeArticle
PublisherMultidisciplinary Digital Publishing Institute (MDPI)
Rights accessOpen Access
Abstract
In recent years Urban Resilience has taken great relevance both in the academic field and urban governance and management. However, uncertainties and fuzziness hinder its implementation to urban planning realm, in general, and urban regeneration policies, particularly. In addition, most attempts favoring Urban Resilience embrace a Bouncing-Back (Engineering-Resilience) top-down conception of the term. As a counterpoint, the paper claims for the socio-ecological (bouncing-forward) bottom-up resilience approach as the ability of systems to continuously progress and adapt. The paper bases on the socio-cultural community-led case study of CanFugarolas, in Mataró (Barcelona), for the recovery of a derelict industrial building, as a major contribution, given the lack of attention to resilience emerging from grassroots, community-led efforts. Regarding urban regeneration and the difficulties (stagnation) observed at the infrastructural and regulatory subsystems (status quo), the social subsystem stands as the guardian and promoter of urban resilience. Both because of its capacity for self-organized internal functioning and because of social-centered cross-scale interactions that enable the progression of the former. Thus, under the heuristics of the Adaptive Cycle and the Panarchy model, the paper analyses the cycle transitioning at each urban subsystem as well as interactions between them. As a result, insurmountable obstacles (traps) at the built stock and urban planning are revealed, contrasting to the ability of the community to navigate all stages, and overcoming successive ailments. Further, inner and cross-scale social-driven (social-centered Panarchy) interactions at the urban system are traced. Hence, the social is revealed both as “urban sink” and “urban trigger” where the community, in the form of actor-network, becomes the catalyzer (through Remember and Revolt mechanisms) for transformative regeneration dynamics, and hence for urban resilience, also at the city scale.
Location
1: Carrer de Toló, 7, 08301 Mataró, Barcelona, Espanya
CitationSaez, D. [et al.]. Resilience and urban regeneration: lessons from community-led initiatives: the case study of Can Fugarolas in Mataró (Barcelona). "Sustainability", 20 Novembre 2021, vol. 13.
URIhttp://hdl.handle.net/2117/357047
DOI10.3390/su132212855
ISSN2071-1050
Publisher versionhttps://www.mdpi.com/
Other identifiershttps://www.mdpi.com/2071-1050/13/22/12855
Collections
Share: