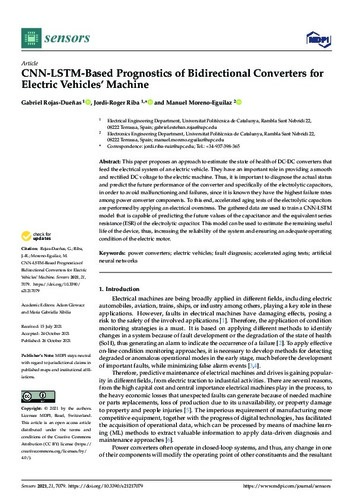 Document typeArticle
PublisherMultidisciplinary Digital Publishing Institute (MDPI)
Rights accessOpen Access
Abstract
This paper proposes an approach to estimate the state of health of DC-DC converters that feed the electrical system of an electric vehicle. They have an important role in providing a smooth and rectified DC voltage to the electric machine. Thus, it is important to diagnose the actual status and predict the future performance of the converter and specifically of the electrolytic capacitors, in order to avoid malfunctioning and failures, since it is known they have the highest failure rates among power converter components. To this end, accelerated aging tests of the electrolytic capacitors are performed by applying an electrical overstress. The gathered data are used to train a CNN-LSTM model that is capable of predicting the future values of the capacitance and the equivalent series resistance (ESR) of the electrolytic capacitor. This model can be used to estimate the remaining useful life of the device, thus, increasing the reliability of the system and ensuring an adequate operating condition of the electric motor.
CitationRojas, G.; Riba, J.; Moreno-Eguilaz, J.M. CNN-LSTM-based prognostics of bidirectional converters for electric vehicles' machine. "Sensors", 26 Octubre 2021, vol. 21, núm. 21, p. 7079:1-7079:18.
URIhttp://hdl.handle.net/2117/356678
DOI10.3390/s21217079
ISSN1424-8220
Publisher versionhttps://www.mdpi.com/1424-8220/21/21/7079
Collections
Share: