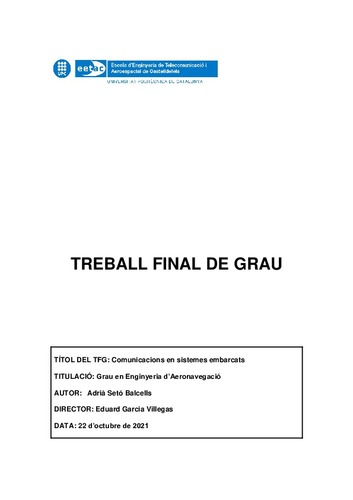 gmail.com
Tutor / directorGarcía Villegas, Eduardo
Document typeBachelor thesis
Rights accessOpen Access
Abstract
The project consists of the analysis of some communication technologies currently used in the communication of UAV onboard systems, both between internal modules and with external systems (such as another drone or ground control), and the research of several middleware that can serve as alternatives to carry out these data transmissions. The chosen middleware have been described throughout the project, giving information about their main features, their operation, the connection and data transmission methods, and other details that have been considered relevant to be able to implement and compare them later. After this definition, a code implementation simulating a simple telemetry transmission system from a drone to another device has been carried out for each of the described middleware, showing the result of the data transmission between two Raspberry Pi. In addition to the code, the steps to be followed for the installation and configuration of the required libraries to be able to use the middleware are also indicated. Then, a theoretical comparison was carried out for all the chosen middleware, based on the main features described above, and a practical comparison, modifying the implementations that had been carried out, to send the same data in all cases and compare the results. From this comparison, it was possible to draw some conclusions about an evaluation of the chosen middleware and their possible use in the UAV onboard systems. Finally, a proof of concept has been designed through one of the described middleware, which involves the transmission of data between two drones and a ground station, and the delivery of location change commands directly between the drones.
SubjectsDrone aircraft, Avions no tripulats
DegreeGRAU EN ENGINYERIA D'AERONAVEGACIÓ (Pla 2010)
URIhttp://hdl.handle.net/2117/356381
Collections
Share: