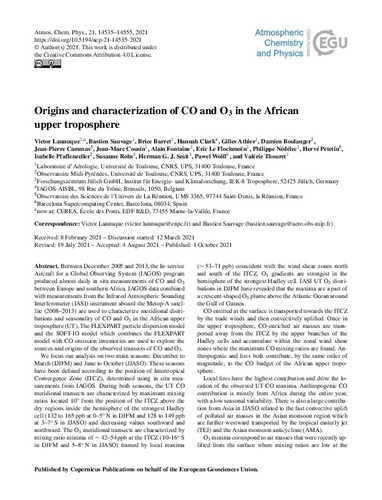 Show full item record
Lannuque, Victor
Sauvage, Bastien
Barret, Brice
Clark, Hannah
Athier, Gilles
Petetin, Hervé
Document typeArticle
PublisherCopernicus Publications
Rights accessOpen Access
European Commission's projectSTARS - SupercompuTing And Related applicationS Fellows Program (EC-H2020-754433)
Abstract
Between December 2005 and 2013, the In-service Aircraft for a Global Observing System (IAGOS) program produced almost daily in situ measurements of CO and O3 between Europe and southern Africa. IAGOS data combined with measurements from the Infrared Atmospheric Sounding Interferometer (IASI) instrument aboard the Metop-A satellite (2008–2013) are used to characterize meridional distributions and seasonality of CO and O3 in the African upper troposphere (UT). The FLEXPART particle dispersion model and the SOFT-IO model which combines the FLEXPART model with CO emission inventories are used to explore the sources and origins of the observed transects of CO and O3. We focus our analysis on two main seasons: December to March (DJFM) and June to October (JJASO). These seasons have been defined according to the position of Intertropical Convergence Zone (ITCZ), determined using in situ measurements from IAGOS. During both seasons, the UT CO meridional transects are characterized by maximum mixing ratios located 10∘ from the position of the ITCZ above the dry regions inside the hemisphere of the strongest Hadley cell (132 to 165 ppb at 0–5∘ N in DJFM and 128 to 149 ppb at 3–7∘ S in JJASO) and decreasing values southward and northward. The O3 meridional transects are characterized by mixing ratio minima of ∼42–54 ppb at the ITCZ (10–16∘ S in DJFM and 5–8∘ N in JJASO) framed by local maxima (∼53–71 ppb) coincident with the wind shear zones north and south of the ITCZ. O3 gradients are strongest in the hemisphere of the strongest Hadley cell. IASI UT O3 distributions in DJFM have revealed that the maxima are a part of a crescent-shaped O3 plume above the Atlantic Ocean around the Gulf of Guinea. CO emitted at the surface is transported towards the ITCZ by the trade winds and then convectively uplifted. Once in the upper troposphere, CO-enriched air masses are transported away from the ITCZ by the upper branches of the Hadley cells and accumulate within the zonal wind shear zones where the maximum CO mixing ratios are found. Anthropogenic and fires both contribute, by the same order of magnitude, to the CO budget of the African upper troposphere. Local fires have the highest contribution and drive the location of the observed UT CO maxima. Anthropogenic CO contribution is mostly from Africa during the entire year, with a low seasonal variability. There is also a large contribution from Asia in JJASO related to the fast convective uplift of polluted air masses in the Asian monsoon region which are further westward transported by the tropical easterly jet (TEJ) and the Asian monsoon anticyclone (AMA). O3 minima correspond to air masses that were recently uplifted from the surface where mixing ratios are low at the ITCZ. The O3 maxima correspond to old high-altitude air masses uplifted from either local or long-distance area of high O3 precursor emissions (Africa and South America during all the year, South Asia mainly in JJASO) and must be created during transport by photochemistry.
Dataset  https://en.aeris-data.fr/landing-page/?uuid=575882c0-64ce-4648-bb19-00030d5d63af
http://www.iagos-data.fr/
CitationLannuque, V. [et al.]. Origins and characterization of CO and O3 in the African upper troposphere. "Atmospheric Chemistry and Physics", 2021, vol. 21, núm. 19, p. 14535-14555.
URIhttp://hdl.handle.net/2117/356237
DOI10.5194/acp-21-14535-2021
ISSN1680-7324
Publisher versionhttps://acp.copernicus.org/articles/21/14535/2021/acp-21-14535-2021.html
Collections
Share: