THM analysis of a soil drying test in an environmental chamber: the role of boundary conditions 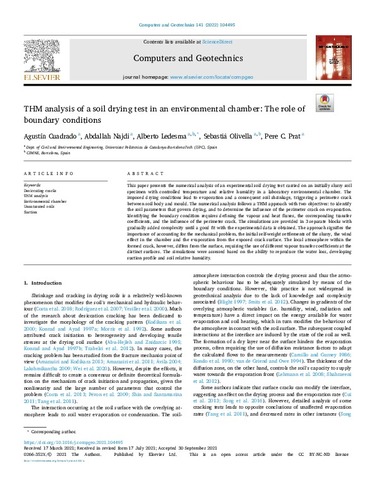 Document typeArticle
PublisherElsevier
Rights accessOpen Access
All rights reserved. This work is protected by the corresponding intellectual and industrial property rights. Without prejudice to any existing legal exemptions, reproduction, distribution, public communication or transformation of this work are prohibited without permission of the copyright holder
ProjectDETERIORO FISICO DEL SUELO DEBIDO A ACCIONES AMBIENTALES: SOLUCIONES TECNOLOGICAS PARA MITIGACION DE RIESGOS (AEI-BIA2017-82594-R)
Abstract
This paper presents the numerical analysis of an experimental soil drying test carried on an initially slurry soil specimen with controlled temperature and relative humidity in a laboratory environmental chamber. The imposed drying conditions lead to evaporation and a consequent soil shrinkage, triggering a perimeter crack between soil body and mould. The numerical analysis follows a THM approach with two objectives: to identify the soil parameters that govern drying, and to determine the influence of the perimeter crack on evaporation. Identifying the boundary condition requires defining the vapour and heat fluxes, the corresponding transfer coefficients, and the influence of the perimeter crack. The simulations are provided in 3 separate blocks with gradually added complexity until a good fit with the experimental data is obtained. The approach signifies the importance of accounting for the mechanical problem, the initial self-weight settlements of the slurry, the wind effect in the chamber and the evaporation from the exposed crack surface. The local atmosphere within the formed crack, however, differs from the surface, requiring the use of different vapour transfer coefficients at the distinct surfaces. The simulations were assessed based on the ability to reproduce the water loss, developing suction profile and soil relative humidity.
CitationCuadrado, A. [et al.]. THM analysis of a soil drying test in an environmental chamber: the role of boundary conditions. "Computers and geotechnics", 2022, vol. 141, p. 104495:1-104495:15.
URIhttp://hdl.handle.net/2117/355925
DOI10.1016/j.compgeo.2021.104495
ISSN0266-352X
Publisher versionhttps://www.sciencedirect.com/science/article/pii/S0266352X2100478X
Collections
Share: