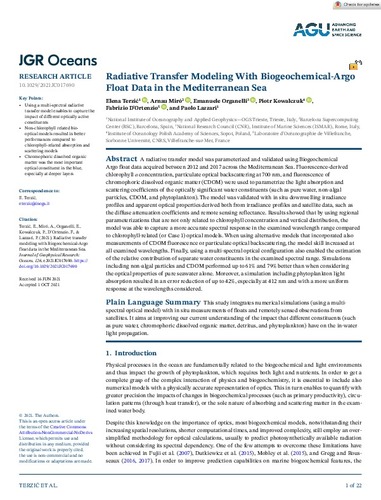 Except where otherwise noted, content on this work is licensed under a Creative Commons license : Attribution-NonCommercial-NoDerivs 4.0 International
Abstract
A radiative transfer model was parameterized and validated using Biogeochemical Argo float data acquired between 2012 and 2017 across the Mediterranean Sea. Fluorescence-derived chlorophyll urn:x-wiley:21699275:media:jgrc24745:jgrc24745-math-0001 concentration, particulate optical backscattering at 700 nm, and fluorescence of chromophoric dissolved organic matter (CDOM) were used to parametrize the light absorption and scattering coefficients of the optically significant water constituents (such as pure water, non-algal particles, CDOM, and phytoplankton). The model was validated with in situ downwelling irradiance profiles and apparent optical properties derived both from irradiance profiles and satellite data, such as the diffuse attenuation coefficients and remote sensing reflectance. Results showed that by using regional parameterizations that are not only related to chlorophyll concentration and vertical distribution, the model was able to capture a more accurate spectral response in the examined wavelength range compared to chlorophyll-related (or Case 1) optical models. When using alternative models that incorporated also measurements of CDOM fluorescence or particulate optical backscattering, the model skill increased at all examined wavelengths. Finally, using a multi-spectral optical configuration also enabled the estimation of the relative contribution of separate water constituents in the examined spectral range. Simulations including non-algal particles and CDOM performed up to 61% and 79% better than when considering the optical properties of pure seawater alone. Moreover, a simulation including phytoplankton light absorption resulted in an error reduction of up to 42%, especially at 412 nm and with a more uniform response at the wavelengths considered.
CitationTerzic, E. [et al.]. Radiative transfer modeling with BGC-Argo float data in the Mediterranean Sea. "Journal of geophysical research: oceans", 4 Octubre 2021, vol. 126, núm. 10, p. 1-22.
URIhttp://hdl.handle.net/2117/355656
DOI10.1029/2021JC017690
ISSN2169-9291
Publisher versionhttps://agupubs.onlinelibrary.wiley.com/doi/10.1029/2021JC017690
Collections
Share: