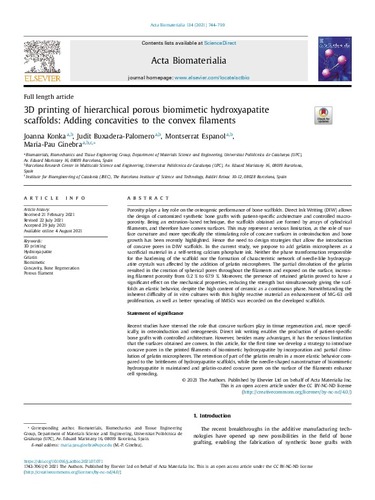 Except where otherwise noted, content on this work is licensed under a Creative Commons license : Attribution-NonCommercial-NoDerivs 4.0 International
Abstract
Porosity plays a key role on the osteogenic performance of bone scaffolds. Direct Ink Writing (DIW) allows the design of customized synthetic bone grafts with patient-specific architecture and controlled macroporosity. Being an extrusion-based technique, the scaffolds obtained are formed by arrays of cylindrical filaments, and therefore have convex surfaces. This may represent a serious limitation, as the role of surface curvature and more specifically the stimulating role of concave surfaces in osteoinduction and bone growth has been recently highlighted. Hence the need to design strategies that allow the introduction of concave pores in DIW scaffolds. In the current study, we propose to add gelatin microspheres as a sacrificial material in a self-setting calcium phosphate ink. Neither the phase transformation responsible for the hardening of the scaffold nor the formation of characteristic network of needle-like hydroxyapatite crystals was affected by the addition of gelatin microspheres. The partial dissolution of the gelatin resulted in the creation of spherical pores throughout the filaments and exposed on the surface, increasing filament porosity from 0.2 % to 67.9 %. Moreover, the presence of retained gelatin proved to have a significant effect on the mechanical properties, reducing the strength but simultaneously giving the scaffolds an elastic behavior, despite the high content of ceramic as a continuous phase. Notwithstanding the inherent difficulty of in vitro cultures with this highly reactive material an enhancement of MG-63 cell proliferation, as well as better spreading of hMSCs was recorded on the developed scaffolds.
CitationKonka, J. [et al.]. 3D printing of hierarchical porous biomimetic hydroxyapatite scaffolds: Adding concavities to the convex filaments. "Acta biomaterialia", 1 Gener 2021, vol. 134, núm. 15, p. 744-759.
URIhttp://hdl.handle.net/2117/355149
DOI10.1016/j.actbio.2021.07.071
ISSN1742-7061
Publisher versionhttps://www.sciencedirect.com/science/article/pii/S1742706121005092
Collections
Share: