Fault-tolerant control of a service robot 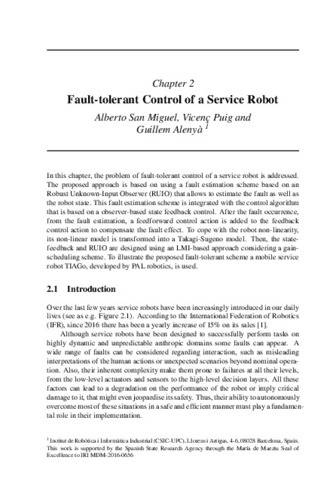 Except where otherwise noted, content on this work is licensed under a Creative Commons license : Attribution-NonCommercial-NoDerivs 3.0 Spain
Abstract
In this chapter, the problem of fault -tolerant control of a service robot is addressed. The proposed approach is based on using a fault estimation scheme based on a robust unknown -input observer (RUI0) that allows one to estimate the fault as well as the robot state. This fault estimation scheme is integrated with the control algorithm that is based on observer -based state -feedback control. After the fault occurrence, from the fault estimation, a feedforward control action is added to the feedback control action to compensate the fault effect. To cope with the robot non -linearity, its non-linear model is transformed into a Takagi-Sugeno (TS) model. Then, the state feedback and RUI0 are designed using a linear matrix inequality (LMI)-based approach considering a gain -scheduling scheme. To illustrate the proposed fault -tolerant scheme a mobile service robot TIAGo, developed by PAL Robotics, is used.
CitationSan-Miguel, A.; Puig, V.; Alenyà, G. Fault-tolerant control of a service robot. A: "Fault diagnosis and fault-tolerant control of robotic and autonomous systems". 2020, p. 117-141.
URIhttp://hdl.handle.net/2117/353925
DOI10.1049/PBCE126E
ISBN978-1-78561-830-7
Publisher versionhttps://digital-library.theiet.org/content/books/ce/pbce126e
Collections
Share: