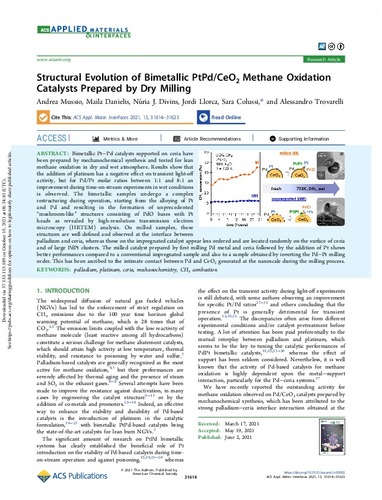 Colussi, Sara
Trovarelli, Alessandro
Document typeArticle
Rights accessOpen Access
Abstract
Bimetallic Pt–Pd catalysts supported on ceria have been prepared by mechanochemical synthesis and tested for lean methane oxidation in dry and wet atmosphere. Results show that the addition of platinum has a negative effect on transient light-off activity, but for Pd/Pt molar ratios between 1:1 and 8:1 an improvement during time-on-stream experiments in wet conditions is observed. The bimetallic samples undergo a complex restructuring during operation, starting from the alloying of Pt and Pd and resulting in the formation of unprecedented “mushroom-like” structures consisting of PdO bases with Pt heads as revealed by high-resolution transmission electron microscopy (HRTEM) analysis. On milled samples, these structures are well-defined and observed at the interface between palladium and ceria, whereas those on the impregnated catalyst appear less ordered and are located randomly on the surface of ceria and of large PdPt clusters. The milled catalyst prepared by first milling Pd metal and ceria followed by the addition of Pt shows better performances compared to a conventional impregnated sample and also to a sample obtained by inverting the Pd–Pt milling order. This has been ascribed to the intimate contact between Pd and CeO2 generated at the nanoscale during the milling process.
CitationMussio, A. [et al.]. Structural evolution of bimetallic PtPd/CeO2 methane oxidation catalysts prepared by dry milling. "ACS Applied materials and interfaces", 2 Juny 2021, vol. 13, núm. 27, p. 31614-31623.
URIhttp://hdl.handle.net/2117/353697
DOI10.1021/acsami.1c05050
ISSN1944-8252
Publisher versionhttps://pubs.acs.org/doi/10.1021/acsami.1c05050
Collections
Share: