On the m23 c6-carbide in 2205 duplex stainless steel: An unexpected (m23 c6 /austenite)—eutectoid in the d-ferritic matrix 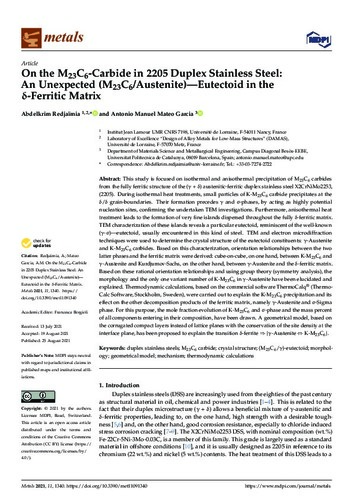 Document typeArticle
PublisherMultidisciplinary Digital Publishing Institute (MDPI)
Rights accessOpen Access
Abstract
This study is focused on isothermal and anisothermal precipitation of M23C6 carbides from the fully ferritic structure of the (¿ + d) austenitic-ferritic duplex stainless steel X2CrNiMo2253, (2205). During isothermal heat treatments, small particles of K-M23C6 carbide precipitates at the d/d grain-boundaries. Their formation precedes ¿ and s-phases, by acting as highly potential nucleation sites, confirming the undertaken TEM investigations. Furthermore, anisothermal heat treatment leads to the formation of very fine islands dispersed throughout the fully d-ferritic matrix. TEM characterization of these islands reveals a particular eutectoid, reminiscent of the well-known (¿-s)—eutectoid, usually encountered in this kind of steel. TEM and electron microdiffraction techniques were used to determine the crystal structure of the eutectoid constituents: ¿-Austenite and K-M23C6 carbides. Based on this characterization, orientation relationships between the two latter phases and the ferritic matrix were derived: cube-on-cube, on one hand, between K-M23C6 and ¿-Austenite and Kurdjumov-Sachs, on the other hand, between ¿-Austenite and the d-ferritic matrix. Based on these rational orientation relationships and using group theory (symmetry analysis), the morphology and the only one variant number of K-M23C6 in ¿-Austenite have been elucidated and explained. Thermodynamic calculations, based on the commercial software ThermoCalq® (Thermo-Calc Software, Stockholm, Sweden), were carried out to explain the K-M23C6 precipitation and its effect on the other decomposition products of the ferritic matrix, namely ¿-Austenite and s-Sigma phase. For this purpose, the mole fraction evolution of K-M23C6 and s-phase and the mass percent of all components entering in their composition, have been drawn. A geometrical model, based on the corrugated compact layers instead of lattice planes with the conservation of the site density at the interface plane, has been proposed to explain the transition d-ferrite ¿ {¿-Austenite ¿ K-M23C6}.
CitationRedjaïmia, A.; Mateo, A. On the m23 c6-carbide in 2205 duplex stainless steel: An unexpected (m23 c6 /austenite)—eutectoid in the d-ferritic matrix. "Metals", 1 Setembre 2021, vol. 11, núm. 9, p. 1340:1-1340:22.
URIhttp://hdl.handle.net/2117/353543
DOI10.3390/met11091340
ISSN2075-4701
Publisher versionhttps://www.mdpi.com/2075-4701/11/9/1340
Collections
Share: