Can Menzerath’s law be a criterion of complexity in communication? 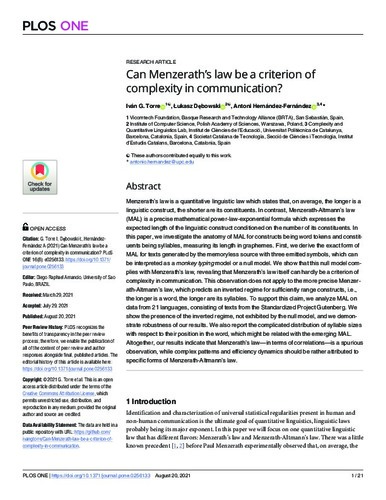 Except where otherwise noted, content on this work is licensed under a Creative Commons license : Attribution 4.0 International
ProjectGESTION Y ANALISIS DE DATOS COMPLEJOS (AEI-TIN2017-89244-R)
Abstract
Menzerath’s law is a quantitative linguistic law which states that, on average, the longer is a linguistic construct, the shorter are its constituents. In contrast, Menzerath-Altmann’s law (MAL) is a precise mathematical power-law-exponential formula which expresses the expected length of the linguistic construct conditioned on the number of its constituents. In this paper, we investigate the anatomy of MAL for constructs being word tokens and constituents being syllables, measuring its length in graphemes. First, we derive the exact form of MAL for texts generated by the memoryless source with three emitted symbols, which can be interpreted as a "monkey typing" model or a null model. We show that this null model complies with Menzerath’s law, revealing that Menzerath’s law itself can hardly be a criterion of complexity in communication. This observation does not apply to the more precise Menzerath-Altmann’s law, which predicts an inverted regime for sufficiently range constructs, i.e., the longer is a word, the longer are its syllables. To support this claim, we analyze MAL on data from 21 languages, consisting of texts from the Standardized Project Gutenberg. We show the presence of the inverted regime, not exhibited by the null model, and we demonstrate robustness of our results. We also report the complicated distribution of syllable sizes with respect to their position in the word, which might be related with the emerging MAL. Altogether, our results indicate that Menzerath’s law—in terms of correlations—is a spurious observation, while complex patterns and efficiency dynamics should be rather attributed to specific forms of Menzerath-Altmann’s law.
CitationGonzález, I.; Debowski, L.; Hernández-Fernández, A. Can Menzerath's law be a criterion of complexity in communication? "PloS one", 20 Agost 2021, vol. 16, núm. 8, article e0256133, p. 1-21.
URIhttp://hdl.handle.net/2117/353245
DOI10.1371/journal.pone.0256133
ISSN1932-6203
Publisher versionhttps://journals.plos.org/plosone/article?id=10.1371/journal.pone.0256133
Collections
Share: