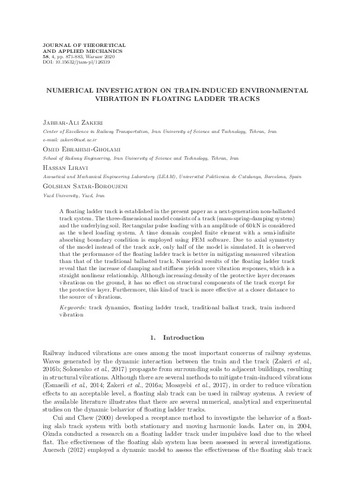 Except where otherwise noted, content on this work is licensed under a Creative Commons license : Attribution-NonCommercial-NoDerivs 3.0 Spain
Abstract
A floating ladder track is established in the present paper as a next-generation non-ballasted track system. The three-dimensional model consists of a track (mass-spring-damping system) and the underlying soil. Rectangular pulse loading with an amplitude of 60 kN is considered as the wheel loading system. A time domain coupled finite element with a semi-infinite absorbing boundary condition is employed using FEM software. Due to axial symmetry of the model instead of the track axle, only half of the model is simulated. It is observed that the performance of the floating ladder track is better in mitigating measured vibration than that of the traditional ballasted track. Numerical results of the floating ladder track reveal that the increase of damping and stiffness yields more vibration responses, which is a straight nonlinear relationship. Although increasing density of the protective layer decreases vibrations on the ground, it has no effect on structural components of the track except for the protective layer. Furthermore, this kind of track is more effective at a closer distance to the source of vibrations.
CitationZakeri, J.; Liravi, H. Numerical investigation on train-induced environmental vibration in floating ladder tracks. "Journal of Theoretical and Applied Mechanics (Poland)", 15 Octubre 2020, vol. 58, núm. 4, p. 871-883.
URIhttp://hdl.handle.net/2117/352908
DOI10.15632/JTAM-PL/126319
ISSN14292955
Publisher versionhttp://jtam.pl/Numerical-Investigation-on-Train-Induced-Environmental-Vibration-in-Floating-Ladder,126319,0,2.html
Collections
Share: