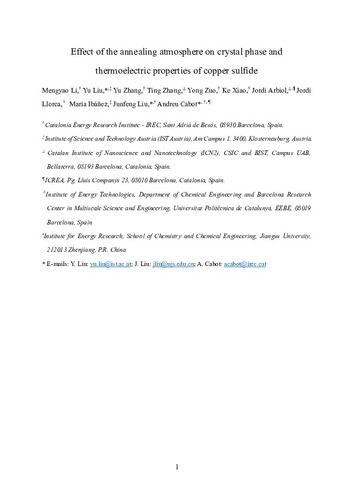 Liu, Junfeng
Cabot, Andreu
Document typeArticle
PublisherAmerican Chemical Society
Rights accessOpen Access
Abstract
Cu2–xS has become one of the most promising thermoelectric materials for application in the middle-high temperature range. Its advantages include the abundance, low cost, and safety of its elements and a high performance at relatively elevated temperatures. However, stability issues limit its operation current and temperature, thus calling for the optimization of the material performance in the middle temperature range. Here, we present a synthetic protocol for large scale production of covellite CuS nanoparticles at ambient temperature and atmosphere, and using water as a solvent. The crystal phase and stoichiometry of the particles are afterward tuned through an annealing process at a moderate temperature under inert or reducing atmosphere. While annealing under argon results in Cu1.8S nanopowder with a rhombohedral crystal phase, annealing in an atmosphere containing hydrogen leads to tetragonal Cu1.96S. High temperature X-ray diffraction analysis shows the material annealed in argon to transform to the cubic phase at ca. 400 K, while the material annealed in the presence of hydrogen undergoes two phase transitions, first to hexagonal and then to the cubic structure. The annealing atmosphere, temperature, and time allow adjustment of the density of copper vacancies and thus tuning of the charge carrier concentration and material transport properties. In this direction, the material annealed under Ar is characterized by higher electrical conductivities but lower Seebeck coefficients than the material annealed in the presence of hydrogen. By optimizing the charge carrier concentration through the annealing time, Cu2–xS with record figures of merit in the middle temperature range, up to 1.41 at 710 K, is obtained. We finally demonstrate that this strategy, based on a low-cost and scalable solution synthesis process, is also suitable for the production of high performance Cu2–xS layers using high throughput and cost-effective printing technologies.
CitationLi, M. [et al.]. Effect of the annealing atmosphere on crystal phase and thermoelectric properties of copper sulfide. "ACS Nano", 1 Març 2021, vol. 15, núm. 3, p. 4967-4978.
URIhttp://hdl.handle.net/2117/352777
DOI10.1021/acsnano.0c09866
ISSN1936-086X
Collections
Share: