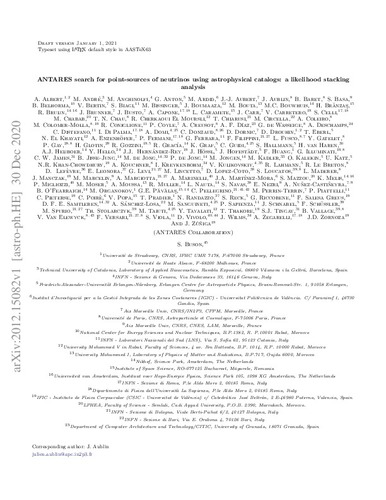 Anghinolfi, Marco
Anton, Gisela
Ardid Ramírez, Miguel
Aubert, J.-J.
Aublin, J.
Baret, Bruny
Basa, S.
Document typeArticle
PublisherInstitute of Physics (IOP)
Rights accessOpen Access
Abstract
A search for astrophysical pointlike neutrino sources using the data collected by the ANTARES detector between 2007 January 29 and 2017 December 31 is presented. A likelihood method is used to assess the significance of an excess of muon neutrinos inducing track-like events in correlation with the location of a list of possible sources. Different sets of objects are tested in the analysis: (a) a subsample of the Fermi 3LAC catalog of blazars, (b) a jetobscured population of active galactic nuclei, (c) a sample of hard X-ray selected radio galaxies, (d) a star-forming galaxy catalog, and (e) a public sample of 56 very-high-energy track events from the IceCube experiment. None of the tested sources shows a significant association with the sample of neutrinos detected by ANTARES. The smallest p-value is obtained for the catalog of radio galaxies with an equal-weights hypothesis, with a pre-trial pvalue equivalent to a 2.8s excess, which is equivalent to 1.6s post-trial. In addition, the results of a dedicated analysis for the blazar MG3 J225517+2409 are also reported: this source is found to be the most significant within the Fermi 3LAC sample, with five ANTARES events located less than one degree from the source. This blazar showed evidence of flaring activity in Fermi data, in spacetime coincidence with a high-energy track detected by IceCube. An a posteriori significance of 2.6s for the combination of ANTARES and IceCube data is reported.
CitationAlbert, A. [et al.]. ANTARES search for point sources of neutrinos using astrophysical catalogs: a likelihood analysis. "The astrophysical journal letters", 10 Abril 2021, vol. 911, núm. 1, p. 48:1-48:11.
URIhttp://hdl.handle.net/2117/352206
DOI10.3847/1538-4357/abe53c
ISSN1538-4357
Publisher versionhttps://iopscience.iop.org/article/10.3847/1538-4357/abe53c
Other identifiershttps://arxiv.org/abs/2012.15082
Collections
Share: