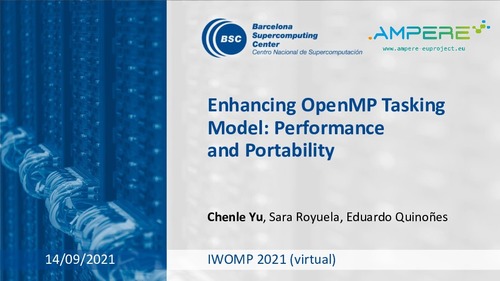 Quiñones Moreno, Eduardo
Document typeConference report
PublisherSpringer
Rights accessOpen Access
All rights reserved. This work is protected by the corresponding intellectual and industrial property rights. Without prejudice to any existing legal exemptions, reproduction, distribution, public communication or transformation of this work are prohibited without permission of the copyright holder
ProjectAMPERE - A Model-driven development framework for highly Parallel and EneRgy-Efficient computation supporting multi-criteria optimisation (EC-H2020-871669)
Abstract
OpenMP, as the de-facto standard programming model in symmetric multiprocessing for HPC, has seen its performance boosted continuously by the community, either through implementation enhancements or specification augmentations. Furthermore, the language has evolved from a prescriptive nature, as defined by the thread-centric model, to a descriptive behavior, as defined by the task-centric model. However, the overhead related to the orchestration of tasks is still relatively high. Applications exploiting very fine-grained parallelism and systems with a large number of cores available might fail on scaling. In this work, we propose to include the concept of Task Dependency Graph (TDG) in the specification by introducing a new clause, named taskgraph, attached to task or target directives. By design, the TDG allows alleviating the overhead associated with the OpenMP tasking model, and it also facilitates linking OpenMP with other programming models that support task parallelism. According to our experiments, a GCC implementation of the taskgraph is able to significantly reduce the execution time of fine-grained task applications and increase their scalability with regard to the number of threads.
CitationYu, C.; Royuela, S.; Quiñones, E. Enhancing OpenMP tasking model: performance and portability. A: International Workshop on OpenMP. "OpenMP: Enabling Massive Node-Level Parallelism: 17th International Workshop on OpenMP, IWOMP 2021: Bristol, UK, September 14–16, 2021: proceedings". Berlín: Springer, 2021, p. 35-49. ISBN 978-3-030-85262-7. DOI 10.1007/978-3-030-85262-7_3.
URIhttp://hdl.handle.net/2117/351422
DOI10.1007/978-3-030-85262-7_3
ISBN978-3-030-85262-7
Publisher versionhttps://link.springer.com/chapter/10.1007/978-3-030-85262-7_3
Collections
Share: