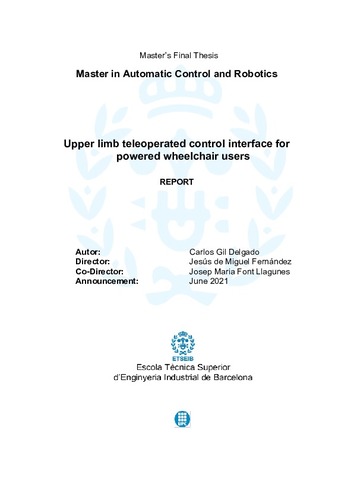 ; Miguel Fernández, Jesús de
CovenanteeDuchenne Parent Project Spain; Centre de Recerca en Enginyeria Biomedica (CREB)
Document typeMaster thesis
Rights accessOpen Access
Abstract
Muscular Dystrophies refers to a group of genetic diseases which cause progressive weakness and degeneration of muscles used during voluntary movement. Many affected people use powered wheelchairs, increasing the muscle loss due to the lack of activation of the upper limb muscles. In order to improve the muscular condition of these subjects was born the powered wheelchair MOVit project. This wheelchair is controlled moving back and forth both arms. The objective of this thesis is to develop an entertaining interface composed by a proof-of-concept car robot, named MOVit Lite, for a future application in the MOVit system controlled with the GripAble hand-training tools. The rehabilitation interface, together with different control modes, have been tested on two impared and two unimpaired subjects. In order to check the exercise of the subjects’ upper limb muscles, muscle activations, heart rate and the arm range of movement during the different exercises have been experimentally measured. The results showed that while exercising with the MOVit Lite system the muscle activation of the upper limb targeted muscles exceeded 20% of the Maximum Voluntary Contraction for one Becker Muscular Dystrophy subject. The other impaired participant reached a muscular activation of 87% of Maximum Voluntary Contraction the Deltoideus Posterior with a standard deviation of 32%. Regarding the metabolic cost, the interface does not require a high intensity of work as the mean heart rate during the activity was similar to the one in rest for all the participants. The range of motion of the arms obtained with the MOVit control mode was similar for unimpaired and impaired subjects, reaching up to 30 ± 7 cm for one unimpaired subject. The wrist rotation of the joystick control mode is also similar and reaches for one impaired subject up to 85° with a standard deviation of 6°. The feedback from the participants was positive marking the system as entertaining for daily use. The MOVit Lite system has fulfilled the main objectives stated at the beginning of the project. Further tests with a larger sample of impaired subjects need to be carried out. Future steps also include the integration of this system in the powered MOVit wheelchair, which is an ongoing process. We are developing the hardware and control codes to get the same good performance as with the MOVit Lite system, developed in this master’s thesis
SubjectsVehicles, Remotely piloted -- Design and construction, Self-help devices for people with disabilities -- Electronic equipment -- Evaluation, Electric wheelchairs -- Disseny i construcció, Rapid prototyping, Vehicles teledirigits -- Disseny i construcció, Ajuts tecnològics per als discapacitats -- Aparells i instruments -- Avaluació, Cadires de rodes elèctriques -- Disseny i construcció, Prototipatge ràpid
URIhttp://hdl.handle.net/2117/351315
Collections
Share: