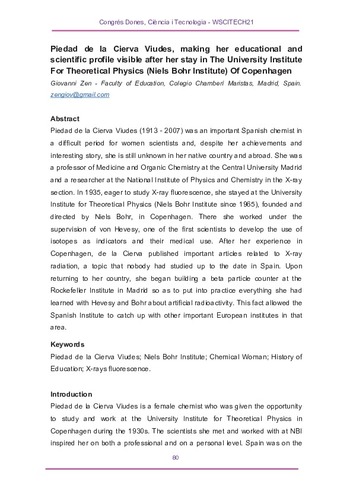 Salvo que se indique lo contrario, los contenidos de esta obra estan sujetos a la licencia de Creative Commons : Reconocimiento-NoComercial-CompartirIgual 3.0 España
Resumen
Piedad de la Cierva Viudes (1913 - 2007) was an important Spanish chemist in a difficult period for women scientists and, despite her achievements and interesting story, she is still unknown in her native country and abroad. She was a professor of Medicine and Organic Chemistry at the Central University Madrid and a researcher at the National Institute of Physics and Chemistry in the X-ray section. In 1935, eager to study X-ray fluorescence, she stayed at the University Institute for Theoretical Physics (Niels Bohr Institute since 1965), founded and directed by Niels Bohr, in Copenhagen. There she worked under the supervision of von Hevesy, one of the first scientists to develop the use of isotopes as indicators and their medical use. After her experience in Copenhagen, de la Cierva published important articles related to X-ray radiation, a topic that nobody had studied up to the date in Spain. Upon returning to her country, she began building a beta particle counter at the Rockefeller Institute in Madrid so as to put into practice everything she had learned with Hevesy and Bohr about artificial radioactivity. This fact allowed the Spanish Institute to catch up with other important European institutes in that area
CitaciónZen, G. Piedad de la Cierva Viudes, making her educational and scientific profile visible after her stay in The University Institute For Theoretical Physics (Niels Bohr Institute) Of Copenhagen. A: WSCITECH21. "2n Congrés Dones, Ciència i Tecnologia : WSCITECH21 : Terrassa, 25 i 26 de març de 2021". 2021, p. 80-91. ISBN 978-84-9880-952-7.
URIhttp://hdl.handle.net/2117/351163
ISBN978-84-9880-952-7
Colecciones
Comparte: