Comparison Between Two Types of Seismic Tests of Racking Systems 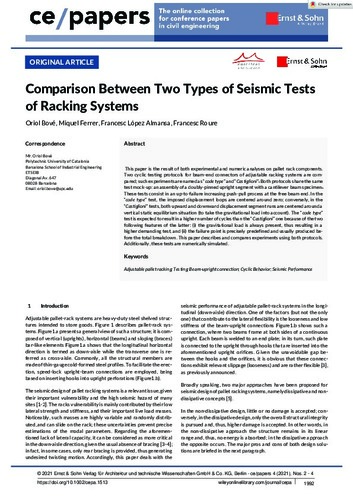 Except where otherwise noted, content on this work is licensed under a Creative Commons license : Attribution-NonCommercial-NoDerivs 3.0 Spain
Abstract
This paper is the result of both experimental and numeric analyses on pallet rack components. Two cyclic testing protocols for beam-end connectors of adjustable racking systems are compared; such experiments are named as “code type” and “Castiglioni”. Both protocols share the same test mock-up: an assembly of a doubly-pinned upright segment with a cantilever beam specimen. These tests consist in an up-to-failure increasing push-pull process at the free beam end. In the “code type” test, the imposed displacement loops are centered around zero; conversely, in the “Castiglioni” tests, both upward and downward displacement segment runs are centered around a vertical static equilibrium situation (to take the gravitational load into account). The “code type” test is expected to result in a higher number of cycles than the “Castiglioni” one because of the two following features of the latter: (i) the gravitational load is always present, thus resulting in a higher demanding test, and (ii) the failure point is precisely predefined and usually produced before the total breakdown. This paper describes and compares experiments using both protocols. Additionally, these tests are numerically simulated.
CitationBove, O. [et al.]. Comparison Between Two Types of Seismic Tests of Racking Systems. "ce/papers", Setembre 2021, vol. 4, núm. 2-4, p. 1992-1998.
URIhttp://hdl.handle.net/2117/351154
DOI10.1002/cepa.1513
ISSN2509-7075
Publisher versionhttps://onlinelibrary.wiley.com/doi/10.1002/cepa.1513
Collections
Share: