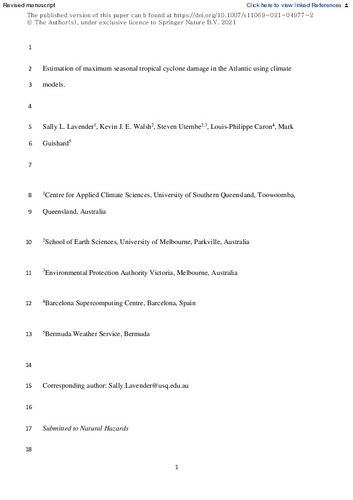 Guishard, Mark
Document typeArticle
PublisherSpringer
Rights accessOpen Access
All rights reserved. This work is protected by the corresponding intellectual and industrial property rights. Without prejudice to any existing legal exemptions, reproduction, distribution, public communication or transformation of this work are prohibited without permission of the copyright holder
Abstract
There are several different estimates of the observed cyclone damage potential of tropical cyclones based on observations of size, intensity and track. For the analysis of climate model data, previous work identified an index, the cyclone damage potential climate index (CDPClimate), based on relative sea surface temperature (SST) and tropical cyclone steering flow to estimate the damage potential in climate models. Using millennia-long climate models, CDPClimate is estimated for the North Atlantic basin and compared against values from reanalyses and the observed damage potential. The peak in SSTs in the cyclone main development region with respect to the tropical mean SSTs is smaller in these models than reanalyses, resulting in smaller variations in CDPClimate. Although the year 1995 had the highest observed cyclone damage potential, the year 2010 is a maximum for CDPClimate in the reanalysis data. The models exceed this 2010 value in less than 1% of model years. Using a model with 100 ensemble members, the variability in CDPClimate is examined further. The interannual variability of the ensemble mean results has a very high correlation (R = 0.95) with reanalyses. The high decadal variability is evident and interannual variability is found to have increased during the 30 years after 1981 relative to those prior. The 2010 ensemble mean value is exceeded in other years by individual ensemble members 1.1% of the time. The results from this study suggest that although it is possible to exceed the observed CDP, this is rare in the current climate. However, this study does not consider changes as we move to future climates.
CitationLavender, S.L. [et al.]. Estimation of maximum seasonal tropical cyclone damage in the Atlantic using climate models. "Natural Hazards", Agost 2021,
URIhttp://hdl.handle.net/2117/350983
DOI10.1007/s11069-021-04977-2
ISSN1573-0840
Publisher versionhttps://link.springer.com/article/10.1007/s11069-021-04977-2
Collections
Share: