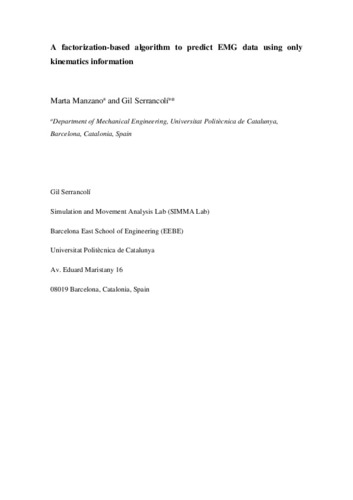 Except where otherwise noted, content on this work is licensed under a Creative Commons license : Attribution-NonCommercial-NoDerivs 3.0 Spain
Abstract
EMG analyses have several applications, such as identifying muscle excitation patterns during rehabilitation or training plans, or controlling EMG-driven devices. However, experimental measurements can be time consuming or difficult to obtain. This study presents a simple algorithm to predict EMG signals that can be applied in real time during running, given only the instantaneous vector of kinematics. We hypothesize that the factorization of the kinematics of the skeleton together with the EMG data of calibration subjects could be used to predict EMG data of another subject only using the kinematic information. The results showed that EMG signals of lower-limb muscles can be predicted accurately in less than a second using this method. Correlation coefficients between predicted and experimental EMG signals were higher than 0.7 in ten out of eleven muscles for most prediction trials and subjects, and their overall median value was higher than 0.8. These values confirm that this method could be used to accurately predict EMG signals in real time when only kinematics are measured.
CitationManzano, M.; Serrancoli, G. A factorization-based algorithm to predict EMG data using only kinematics information. "The International Journal for Numerical Methods in Biomedical Engineering", 8 Juliol 2021, vol. 37, núm. 7, p. e3463:1-e3463:12.
URIhttp://hdl.handle.net/2117/350980
DOI10.1002/cnm.3463
ISSN2040-7939
Publisher versionhttps://onlinelibrary.wiley.com/doi/epdf/10.1002/cnm.3463
Collections
Share: