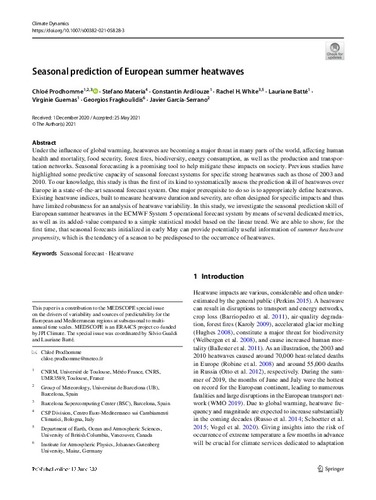 Except where otherwise noted, content on this work is licensed under a Creative Commons license : Attribution 3.0 Spain
ProjectERA4CS - European Research Area for Climate Services (EC-H2020-690462)
PROTECT - Propagation of atmospheric ROssby waves (EC-H2020-797961)
Abstract
Under the influence of global warming, heatwaves are becoming a major threat in many parts of the world, affecting human health and mortality, food security, forest fires, biodiversity, energy consumption, as well as the production and transportation networks. Seasonal forecasting is a promising tool to help mitigate these impacts on society. Previous studies have highlighted some predictive capacity of seasonal forecast systems for specific strong heatwaves such as those of 2003 and 2010. To our knowledge, this study is thus the first of its kind to systematically assess the prediction skill of heatwaves over Europe in a state-of-the-art seasonal forecast system. One major prerequisite to do so is to appropriately define heatwaves. Existing heatwave indices, built to measure heatwave duration and severity, are often designed for specific impacts and thus have limited robustness for an analysis of heatwave variability. In this study, we investigate the seasonal prediction skill of European summer heatwaves in the ECMWF System 5 operational forecast system by means of several dedicated metrics, as well as its added-value compared to a simple statistical model based on the linear trend. We are able to show, for the first time, that seasonal forecasts initialized in early May can provide potentially useful information of summer heatwave propensity, which is the tendency of a season to be predisposed to the occurrence of heatwaves.
Related documenthttps://static-content.springer.com/esm/art%3A10.1007%2Fs00382-021-05828-3/MediaObjects/382_2021_5828_MOESM1_ESM.pdf
CitationProdhomme, C. [et al.]. Seasonal prediction of European summer heatwaves. "Climate Dynamics", 2021,
URIhttp://hdl.handle.net/2117/350618
DOI10.1007/s00382-021-05828-3
Publisher versionhttps://link.springer.com/article/10.1007/s00382-021-05828-3
Collections
Share: