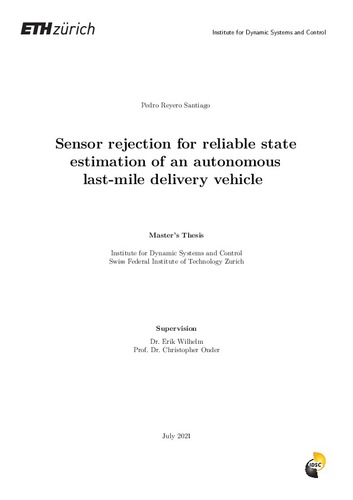 ; Wilhelm, Erik; Onder, Christopher
CovenanteeEidgenössische Technische Hochschule Zürich; Kyburz
Document typeMaster thesis
Rights accessOpen Access
Abstract
State estimation is a critical component of an autonomous vehicle. Safe, accurate and reliable localization can be a challenging task, especially in worst-case scenarios where sensors may suffer from poor performance or failure (for instance, a GPS system inside a building). In these cases, the sensors provide corrupt measurements. Previous works have studied the fusion of valid information from different sensors, however the sensor rejection problem has barely been explored in a general, non algorithm-specific formulation. In this thesis, the online cross-validation and rejection of pose estimates coming from sensors that may fail is studied. This is the applied to the Autonomous Plus2, an autonomous vehicle prototype for last-mile delivery developed by Kyburz Switzerland AG. First, a general overview of autonomous vehicle sensors and their typical failure modes is presented. The specific localization algorithms present on the Autonomous Plus2 are also described. Then, existing sensor rejection approaches are explored, based on parity-based Fault Detection and Isolation (FDI) techniques. New approaches are studied, based on Machine Learning (ML) techniques (decision trees, k-NN, feedforward neural networks and RNNs). A solution combining the aforementioned techniques is proposed, to improve reliability. Finally, an experimental setup is presented and implemented to test and tune each algorithm on the Autonomous Plus2. Various challenging scenarios are considered, to assess performance, trade-offs and weaknesses. The final proposal is a combined decision algorithm, capable of a 70% rejection rate of failed measurements while only losing 5% of the valid measurements.
SubjectsSensor networks -- Evaluation -- Mathematical models, Autonomous vehicles, Xarxes de sensors -- Avaluació -- Models matemàtics, Vehicles autònoms
URIhttp://hdl.handle.net/2117/350390
Collections
Share: