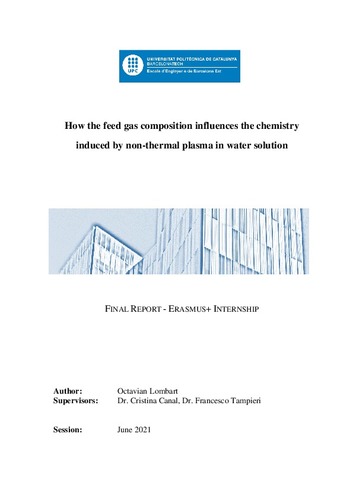 Document typeBachelor thesis
Rights accessOpen Access
Abstract
Non-thermal plasmas are ionized gases at room temperature composed of free electrons, ions, radicals, excited atoms and molecules, neutral molecules and electromagnetic radiation. They are highly reactive systems that are exploited in multiple fields, ranging from material production and modification, environment, agriculture and food processing and medicine. This high versatility is mainly due to the ability to control the type and amount of reactive species (RS) produced during a plasma treatment. The primary RS, generated in a non-thermal plasma, react rapidly with the gas molecules to generate secondary RS that are less reactive and therefore can live longer. If the plasma is generated close to a liquid, the secondary RS can diffuse in the liquid and react with molecules dissolved in it. The nature of the gas and the liquid determine which RS are generated and their amount. The aim of this project is to study the influence of the feed-gas on the RS generated in water solution by an atmospheric pressure plasma jet. The gases that will be investigated will be pure helium and helium doped with molecular oxygen, nitrogen, or water vapour. The presence of RS in the gas-phase will be investigated by optical emission spectroscopy while the amount of RS in water will be quantified by colorimetric and/or fluorescent chemical probes.
SubjectsPlasma (Ionized gases), Plasma (Gasos ionitzats)
DegreeMOBILITAT INCOMING
URIhttp://hdl.handle.net/2117/350293
Collections
Share: