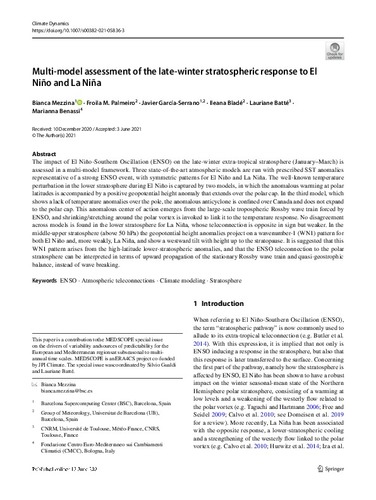 Except where otherwise noted, content on this work is licensed under a Creative Commons license : Attribution 3.0 Spain
ProjectERA4CS - European Research Area for Climate Services (EC-H2020-690462)
Abstract
The impact of El Niño-Southern Oscillation (ENSO) on the late-winter extra-tropical stratosphere (January–March) is assessed in a multi-model framework. Three state-of-the-art atmospheric models are run with prescribed SST anomalies representative of a strong ENSO event, with symmetric patterns for El Niño and La Niña. The well-known temperature perturbation in the lower stratosphere during El Niño is captured by two models, in which the anomalous warming at polar latitudes is accompanied by a positive geopotential height anomaly that extends over the polar cap. In the third model, which shows a lack of temperature anomalies over the pole, the anomalous anticyclone is confined over Canada and does not expand to the polar cap. This anomalous center of action emerges from the large-scale tropospheric Rossby wave train forced by ENSO, and shrinking/stretching around the polar vortex is invoked to link it to the temperature response. No disagreement across models is found in the lower stratosphere for La Niña, whose teleconnection is opposite in sign but weaker. In the middle-upper stratosphere (above 50 hPa) the geopotential height anomalies project on a wavenumber-1 (WN1) pattern for both El Niño and, more weakly, La Niña, and show a westward tilt with height up to the stratopause. It is suggested that this WN1 pattern arises from the high-latitude lower-stratospheric anomalies, and that the ENSO teleconnection to the polar stratosphere can be interpreted in terms of upward propagation of the stationary Rossby wave train and quasi-geostrophic balance, instead of wave breaking.
CitationMezzina, B. [et al.]. Multi-model assessment of the late-winter stratospheric response to El Niño and La Niña. "Climate Dynamics", 2021,
URIhttp://hdl.handle.net/2117/350215
DOI10.1007/s00382-021-05836-3
ISSN1432-0894
0930-7575
Publisher versionhttps://link.springer.com/article/10.1007/s00382-021-05836-3
Collections
Share: