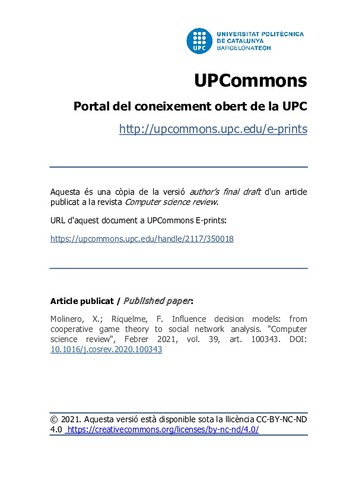 Except where otherwise noted, content on this work is licensed under a Creative Commons license : Attribution-NonCommercial-NoDerivs 4.0 International
ProjectASPECTOS MATEMATICOS, COMPUTACIONALES Y SOCIALES EN CONTEXTOS DE VOTACION Y DE COOPERACION. (MINECO-MTM2015-66818-P)
Abstract
Cooperative game theory considers simple games and influence games as essential classes of games. A simple game can be viewed as a model of voting systems in which a single alternative, such as a bill or an amendment, is pitted against the status quo. An influence game is a cooperative game in which a team of players (or coalition) succeeds if it is able to convince sufficiently many agents to participate in a task. Furthermore, influence decision models allow to represent discrete system dynamics as graphs whose nodes are activated according to an influence spread model. It let us to depth in the social network analysis. All these concepts are applied to a wide variety of disciplines, such as social sciences, economics, marketing, cognitive sciences, political science, biology, computer science, among others. In this survey we present different advances in these topics, joint work with M. Serna. These advances include representations of simple games, the definition of influence games, and how to characterize different problems on influence games (measures, values, properties and problems for particular cases with respect to both the spread of influence and the structure of the graph). Moreover, we also present equivalent models to the simple games, the computation of satisfaction and power in collective decision-making models, and the definition of new centrality measures used for social network analysis. In addition, several interesting computational complexity results have been found.
CitationMolinero, X.; Riquelme, F. Influence decision models: from cooperative game theory to social network analysis. "Computer science review", Febrer 2021, vol. 39, art. 100343.
URIhttp://hdl.handle.net/2117/350018
DOI10.1016/j.cosrev.2020.100343
ISSN1574-0137
Publisher versionhttps://www.sciencedirect.com/science/article/pii/S1574013720304433
Collections
Share: