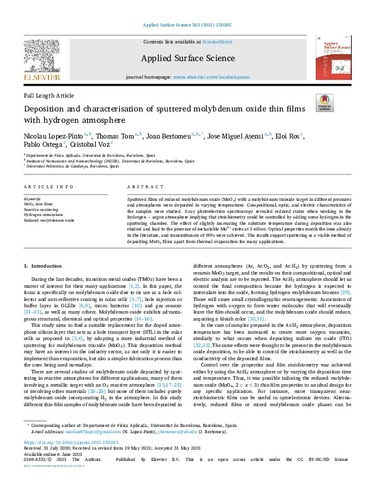 Except where otherwise noted, content on this work is licensed under a Creative Commons license : Attribution-NonCommercial-NoDerivs 4.0 International
Abstract
Sputtered films of reduced molybdenum oxide (MoOx) with a molybdenum trioxide target in different pressures and atmospheres were deposited in varying temperatures. Compositional, optic, and electric characteristics of the samples were studied. X-ray photoelectron spectroscopy revealed reduced states when working in the hydrogen + argon atmosphere implying that stoichiometry could be controlled by adding some hydrogen in the sputtering chamber. The effect of slightly increasing the substrate temperature during deposition was also studied and lead to the presence of metastable Mo4+ states at 3 mTorr. Optical properties match the ones already in the literature, and transmittances of 90% were achieved. The results support sputtering as a viable method of depositing MoOx films apart from thermal evaporation for many applications.
CitationLópez-Pintó, N. [et al.]. Deposition and characterisation of sputtered molybdenum oxide thin films with hydrogen atmosphere. "Applied surface science", Octubre 2021, vol. 563, p. 150285:1-150285:8.
URIhttp://hdl.handle.net/2117/349969
DOI10.1016/j.apsusc.2021.150285
ISSN0169-4332
Publisher versionhttps://www.sciencedirect.com/science/article/pii/S016943322101360X
Collections
Share: