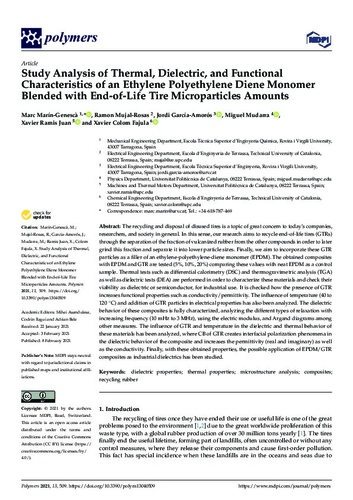 Except where otherwise noted, content on this work is licensed under a Creative Commons license : Attribution 3.0 Spain
Abstract
The recycling and disposal of disused tires is a topic of great concern to today’s companies, researchers, and society in general. In this sense, our research aims to recycle end-of-life tires (GTRs) through the separation of the fraction of vulcanized rubber from the other compounds in order to later grind this fraction and separate it into lower particle sizes. Finally, we aim to incorporate these GTR particles as a filler of an ethylene-polyethylene-diene monomer (EPDM). The obtained composites with EPDM and GTR are tested (5%, 10%, 20%) comparing these values with neat EPDM as a control sample. Thermal tests such as differential calorimetry (DSC) and thermogravimetric analysis (TGA) as well as dielectric tests (DEA) are performed in order to characterize these materials and check their viability as dielectric or semiconductor, for industrial use. It is checked how the presence of GTR increases functional properties such as conductivity/permittivity. The influence of temperature (40 to 120 °C) and addition of GTR particles in electrical properties has also been analyzed. The dielectric behavior of these composites is fully characterized, analyzing the different types of relaxation with increasing frequency (10 mHz to 3 MHz), using the electric modulus, and Argand diagrams among other measures. The influence of GTR and temperature in the dielectric and thermal behavior of these materials has been analyzed, where CB of GTR creates interfacial polarization phenomena in the dielectric behavior of the composite and increases the permittivity (real and imaginary) as well as the conductivity. Finally, with these obtained properties, the possible application of EPDM/GTR composites as industrial dielectrics has been studied
CitationMarín, M. [et al.]. Study analysis of thermal, dielectric and functional characteristics of an ethylene polyethylene diene monomer blended with end-of-life tire microparticles amounts. "Polymers", 2 Febrer 2021, vol. 13, núm. 4, p. 1-19.
URIhttp://hdl.handle.net/2117/349946
DOI10.3390/polym13040509
ISSN2073-4360
Publisher versionhttps://www.mdpi.com/2073-4360/13/4/509
Collections
Share: