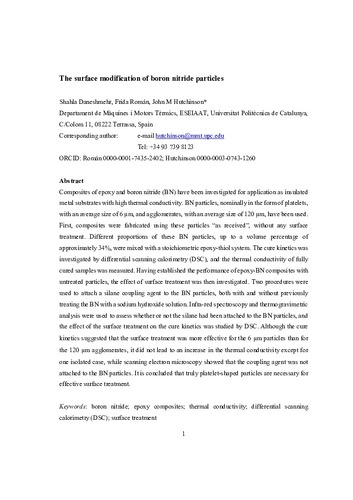 Except where otherwise noted, content on this work is licensed under a Creative Commons license : Attribution-NonCommercial-NoDerivs 3.0 Spain
Abstract
The use of coupling agents to enhance the thermal conductivity of composites of epoxy and boron nitride (BN) has been investigated. Two types of BN particles, lightly aggregated platelets with an average size of 6 µm and agglomerates with an average size of 120 µm, have been used. Different proportions of these BN particles, up to a volume percentage of approximately 34%, were mixed with a stoichiometric epoxy–thiol system and cured either isothermally or non-isothermally. The cure kinetics was investigated by differential scanning calorimetry, and the thermal conductivity of isothermally fully cured samples was measured. The effect of surface treatment of the particles was extensively investigated, with respect to the characteristics of the particles themselves, the cure kinetics and the thermal conductivity of the cured composites. The BN particles were treated with a silane coupling agent, both with and without previously treating the BN with a sodium hydroxide solution. Infrared spectroscopy and thermogravimetric analysis were used to assess whether or not the silane had been attached to the BN particles, and the effect of the surface treatment on the cure kinetics was studied. Although the cure kinetics suggested that the surface treatment was more effective for the 6 µm particles than for the 120 µm agglomerates, it did not generally lead to an increase in the thermal conductivity, while scanning electron microscopy showed that the coupling agent was not attached to the BN particles. It is concluded that truly platelet-shaped particles are necessary for effective surface treatment.
CitationDaneshmehr, S.; Roman, F.; Hutchinson, J.M. The surface modification of boron nitride particles. "Journal of thermal analysis and calorimetry", 1 Gener 2019, núm. 143, p. 151-153.
URIhttp://hdl.handle.net/2117/349845
DOI10.1007/s10973-019-09160-1
ISSN1388-6150
Publisher versionhttps://link.springer.com/article/10.1007/s10973-019-09160-1
Collections
Share: