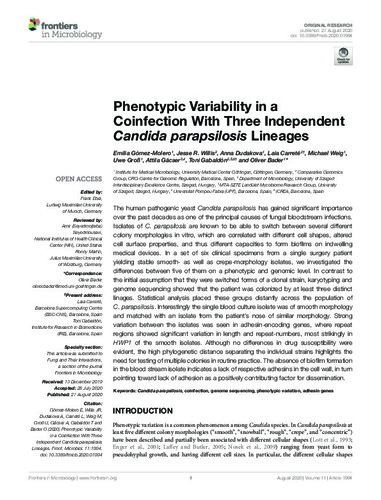 Except where otherwise noted, content on this work is licensed under a Creative Commons license : Attribution 3.0 Spain
Abstract
The human pathogenic yeast Candida parapsilosis has gained significant importance over the past decades as one of the principal causes of fungal bloodstream infections. Isolates of C. parapsilosis are known to be able to switch between several different colony morphologies in vitro, which are correlated with different cell shapes, altered cell surface properties, and thus different capacities to form biofilms on indwelling medical devices. In a set of six clinical specimens from a single surgery patient yielding stable smooth- as well as crepe-morphology isolates, we investigated the differences between five of them on a phenotypic and genomic level. In contrast to the initial assumption that they were switched forms of a clonal strain, karyotyping and genome sequencing showed that the patient was colonized by at least three distinct linages. Statistical analysis placed these groups distantly across the population of C. parapsilosis. Interestingly the single blood culture isolate was of smooth morphology and matched with an isolate from the patient’s nose of similar morphology. Strong variation between the isolates was seen in adhesin-encoding genes, where repeat regions showed significant variation in length and repeat-numbers, most strikingly in HWP1 of the smooth isolates. Although no differences in drug susceptibility were evident, the high phylogenetic distance separating the individual strains highlights the need for testing of multiple colonies in routine practice. The absence of biofilm formation in the blood stream isolate indicates a lack of respective adhesins in the cell wall, in turn pointing toward lack of adhesion as a positively contributing factor for dissemination.
CitationGómez Molero, E. [et al.]. Phenotypic Variability in a Coinfection With Three Independent Candida parapsilosis Lineages. "Frontiers in Microbiology", Agost 2020, vol. 11, 1994.
URIhttp://hdl.handle.net/2117/349740
DOI10.3389/fmicb.2020.01994
ISSN1664-302X
Publisher versionhttps://www.frontiersin.org/articles/10.3389/fmicb.2020.01994/full
Collections
Share: