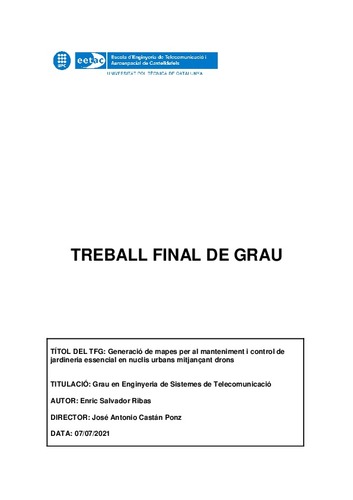 gmail.com
Tutor / directorCastán Ponz, José Antonio
Document typeBachelor thesis
Rights accessOpen Access
Abstract
This project is dedicated to the emerging technology of the drone in the scope of orthophotography and the immediately subsequent processing of images for maps generation. The main goal is mechanizing a procedure that identifies the traffic signals that are in urban spaces and its visibility. First of all, it was necessary to identify the problem to be solved by analyzing it developing a route along our territory. Then we had to decide which technology would be better to solve it. Using the drone as a tool to achieve it has been the best option since its great technological versatility and the lower economic cost it has compared to the technologies that have been used until then to deal with similar situations. Once we have identified the problem and found the method to solve it, it was necessary to develop it looking for the best softwares in the market that would allow us to simulate the flight of the drone and to process the real images of the analyzed traffic signals, too. At the end of the project can be found the real simulations made in different spots of Alta Garrotxa as well as their configurations and final maps. The final result obtained from the real contact with the territory, the use of the drone as the best way to approach it and the theory and practice methodology used, has allowed us as to fulfill the initial purpose of our project. Now, we are capable to obtain a sufficiently detailed map which is able to determine the visibility of a traffic signal. Keywords: orthophotography, drone, signal, visibility, map, flight automation, image processing, simulation.
SubjectsDrone aircraft, Aerial photogrammetry, Avions no tripulats, Fotogrametria aèria
DegreeGRAU EN ENGINYERIA DE SISTEMES DE TELECOMUNICACIÓ (Pla 2009)
Location
1: Alta Garrotxa, Girona, Espanya
URIhttp://hdl.handle.net/2117/349629
Collections
Share: