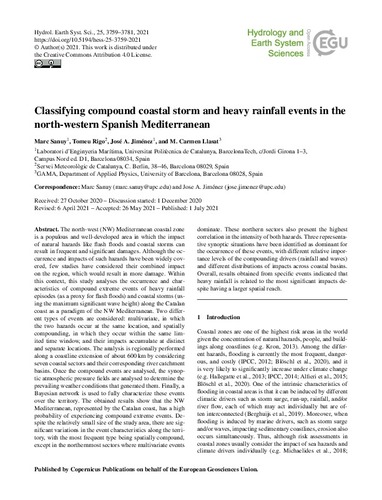 Llasat Botija, Maria Carmen
Document typeArticle
Rights accessOpen Access
Abstract
The north-west (NW) Mediterranean coastal zone is a populous and well-developed area in which the impact of natural hazards like flash floods and coastal storms can result in frequent and significant damages. Although the occurrence and impacts of such hazards have been widely covered, few studies have considered their combined impact on the region, which would result in more damage. Within this context, this study analyses the occurrence and characteristics of compound extreme events of heavy rainfall episodes (as a proxy for flash floods) and coastal storms (using the maximum significant wave height) along the Catalan coast as a paradigm of the NW Mediterranean. Two different types of events are considered: multivariate, in which the two hazards occur at the same location, and spatially compounding, in which they occur within the same limited time window, and their impacts accumulate at distinct and separate locations. The analysis is regionally performed along a coastline extension of about 600¿km by considering seven coastal sectors and their corresponding river catchment basins. Once the compound events are analysed, the synoptic atmospheric pressure fields are analysed to determine the prevailing weather conditions that generated them. Finally, a Bayesian network is used to fully characterize these events over the territory. The obtained results show that the NW Mediterranean, represented by the Catalan coast, has a high probability of experiencing compound extreme events. Despite the relatively small size of the study area, there are significant variations in the event characteristics along the territory, with the most frequent type being spatially compound, except in the northernmost sectors where multivariate events dominate. These northern sectors also present the highest correlation in the intensity of both hazards. Three representative synoptic situations have been identified as dominant for the occurrence of these events, with different relative importance levels of the compounding drivers (rainfall and waves) and different distributions of impacts across coastal basins. Overall, results obtained from specific events indicated that heavy rainfall is related to the most significant impacts despite having a larger spatial reach.
CitationSanuy, M. [et al.]. Classifying compound coastal storm and heavy rainfall events in the north-western Spanish Mediterranean. "Hydrology and Earth system sciences", Juny 2021, vol. 25, núm. 6, p. 3759-3781.
URIhttp://hdl.handle.net/2117/349464
DOI10.5194/hess-25-3759-2021
ISSN1027-5606
Publisher versionhttps://hess.copernicus.org/articles/25/3759/2021/
Collections
Share: