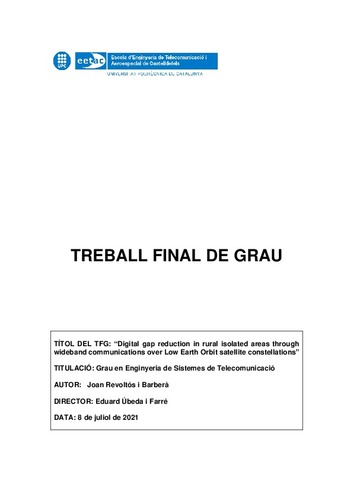 Except where otherwise noted, content on this work is licensed under a Creative Commons license : Attribution-ShareAlike 3.0 Spain
Abstract
There is an international consensus about considering internet access as a need, as a right that humanity needs to ensure to achieve a homogeneous development around the world, without differences. However, even in the most developed countries, the inequality in internet access is clear: the most habited and developed places enjoy fast, stable and reliable internet connections, while the less populated and less developed areas lack it. The projects of Low Earth Orbit satellite constellations are back to be considered as an alternative to connect the world, after years being considered non-viable because of the failure of the similar projects undertaken a couple of decades before. Nowadays, technological progress allows to afford the economic costs of the implementation, even scaling its size, ranging from the 66 satellites of Iridium¿s constellation to the hundreds, thousands, or tens of thousands of satellites for just one megaconstellation. In this work, we make an analysis of two of the most popular projects of megaconstellations at their initial stage, StarLink and OneWeb, in order to assess their performance, their coverage, and the suitability of their topology design. This study is made with the StarPerf software, developed by Tsinghua¿s University scientists. Lastly, the controversies around megaconstellations projects are reviewed, assessing the practical suitability of such technology and the potential threats they can arise in the area of astrophysics.
SubjectsArtificial satellites in navigation, Digital divide, Satèl·lits artificials en navegació, Bretxa digital
DegreeGRAU EN ENGINYERIA DE SISTEMES DE TELECOMUNICACIÓ (Pla 2009)
URIhttp://hdl.handle.net/2117/349458
Collections
Share: