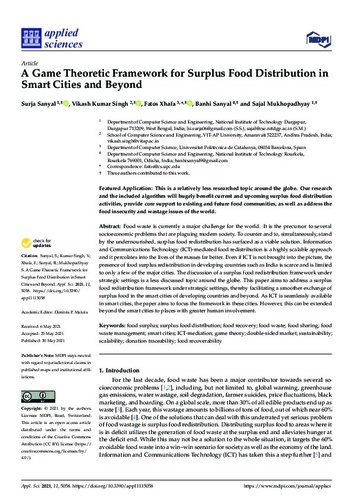 Sanyal, Banhi
Mukhopadhyay, Sajal
Document typeArticle
PublisherMultidisciplinary Digital Publishing Institute
Rights accessOpen Access
Abstract
Food waste is currently a major challenge for the world. It is the precursor to several socioeconomic problems that are plaguing modern society. To counter and to, simultaneously, stand by the undernourished, surplus food redistribution has surfaced as a viable solution. Information and Communications Technology (ICT)-mediated food redistribution is a highly scalable approach and it percolates into the lives of the masses far better. Even if ICT is not brought into the picture, the presence of food surplus redistribution in developing countries such as India is scarce and is limited to only a few of the major cities. The discussion of a surplus food redistribution framework under strategic settings is a less discussed topic around the globe. This paper aims to address a surplus food redistribution framework under strategic settings, thereby facilitating a smoother exchange of surplus food in the smart cities of developing countries and beyond. As ICT is seamlessly available in smart cities, the paper aims to focus the framework in these cities. However, this can be extended beyond the smart cities to places with greater human involvement
CitationSanyal, S. [et al.]. A Game theoretic framework for surplus food distribution in smart cities and beyond. "Applied sciences", Juny 2021, vol. 11, núm. 11, art. 5058.
URIhttp://hdl.handle.net/2117/349200
DOI10.3390/app11115058
ISSN2076-3417
Publisher versionhttps://www.mdpi.com/2076-3417/11/11/5058
Collections
Share: