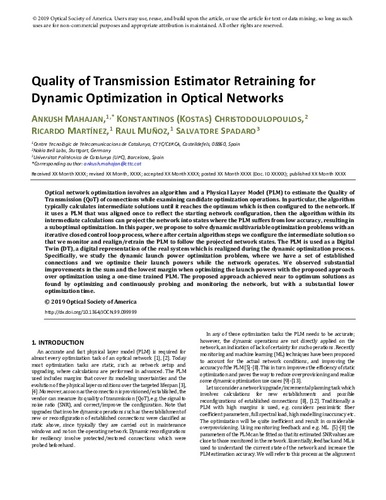 Document typeArticle
PublisherInstitute of Electrical and Electronics Engineers (IEEE)
Rights accessOpen Access
All rights reserved. This work is protected by the corresponding intellectual and industrial property rights. Without prejudice to any existing legal exemptions, reproduction, distribution, public communication or transformation of this work are prohibited without permission of the copyright holder
ProjectONFIRE - Future Optical Networks for Innovation, Research and Experimentation (EC-H2020-765275)
Abstract
Optical network optimization involves an algorithm and a physical layer model (PLM) to estimate the quality of transmission of connections while examining candidate optimization operations. In particular, the algorithm typically calculates intermediate solutions until it reaches the optimum, which is then configured to the network. If it uses a PLM that was aligned once to reflect the starting network configuration, then the algorithm within its intermediate calculations can project the network into states where the PLM suffers from low accuracy, resulting in a suboptimal optimization. In this paper, we propose to solve dynamic multivariable optimization problems with an iterative closed control loop process, where after certain algorithm steps we configure the intermediate solution so that we monitor and realign/retrain the PLM to follow the projected network states. The PLM is used as a digital twin, a digital representation of the real system, which is realigned during the dynamic optimization process. Specifically, we study the dynamic launch power optimization problem, where we have a set of established connections, and we optimize their launch powers while the network operates. We observed substantial improvements in the sum and the lowest margin when optimizing the launch powers with the proposed approach over optimization using a one-time trained PLM. The proposed approach achieved near-to-optimum solutions as found by optimizing and continuously probing and monitoring the network, but with a substantial lower optimization time.
CitationMahajan, A. [et al.]. Quality of transmission estimator retraining for dynamic optimization in optical networks. "Journal of optical communications and networking", 1 Abril 2021, vol. 13, núm. 4, p. B45-B59.
URIhttp://hdl.handle.net/2117/349149
DOI10.1364/JOCN.411524
ISSN1943-0620
Publisher versionhttps://www.osapublishing.org/jocn/abstract.cfm?uri=jocn-13-4-B45
Other identifiershttps://zenodo.org/record/4552373#.YO1BmOj7S7Q
Collections
Share: