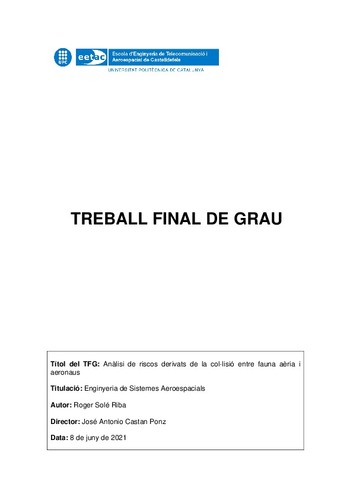 Show full item record
Sole Riba, Roger
Tutor / directorCastan Ponz, José Antonio
Document typeBachelor thesis
Rights accessOpen Access
All rights reserved. This work is protected by the corresponding intellectual and industrial property rights. Without prejudice to any existing legal exemptions, reproduction, distribution, public communication or transformation of this work are prohibited without permission of the copyright holder
Abstract
Collisions betwen birds and aircraft are a recurring phenomenon since the very start of aviation itself. Even thought the chances of suffering an impact are relatively low, the consequences to the operational safety of the flight are not to be underestimated, and have been a long standing headache for manufacturers, airlines, operators, pilots and air traffic controllers alike. Even though bird strikes generate losses of over millions of dollars every year, there is still a huge lack of information available around this matter. In this paper an attempt has been made in order to shed some light to the shear magnitude of this problem, through the use of statistical analysis on the data provided by the International Civil Aviation Organization (ICAO) among other sources. This paper includes the presentation of the bird strike problem using the System Safety Approach method, as well as a study characterization of the consequences of wildlife strikes and the economical losses that this implies for the aviation industry. In the statistical analysis, the factors contributing to the probability to suffer an impact are studied, as well as the variation of that risk as a function of different parameters, such as flight altitude, flight phase...among others. The study also presents the bird species that are a bigger threat to aviation, and tries to explain their behaviour. Lastly, this paper goes through the preventive measures, countermeasures and present legislation put in order to face the bird strike problem, as well as citing their efectiveness and implementation level. The future of bird strike preventing measures and technological advancements and reasearch are also discussed.
SubjectsNavigation (Aeronautics), Navegació aèria
DegreeGRAU EN ENGINYERIA DE SISTEMES AEROESPACIALS (Pla 2015)
URIhttp://hdl.handle.net/2117/348867
Collections
Share: