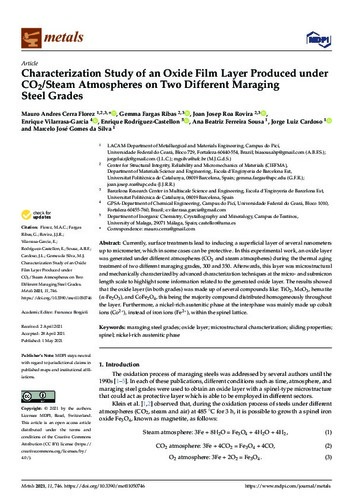 Except where otherwise noted, content on this work is licensed under a Creative Commons license : Attribution-NonCommercial-NoDerivs 3.0 Spain
Abstract
Currently, surface treatments lead to inducing a superficial layer of several nanometers up to micrometer, which in some cases can be protective. In this experimental work, an oxide layer was generated under different atmospheres (CO2 and steam atmospheres) during the thermal aging treatment of two different maraging grades, 300 and 350. Afterwards, this layer was microstructural and mechanically characterized by advanced characterization techniques at the micro- and submicron length scale to highlight some information related to the generated oxide layer. The results showed that the oxide layer (in both grades) was made up of several compounds like: TiO2, MoO3, hematite (a-Fe2O3), and CoFe2O4, this being the majority compound distributed homogeneously throughout the layer. Furthermore, a nickel-rich austenitic phase at the interphase was mainly made up cobalt ions (Co2+), instead of iron ions (Fe2+), within the spinel lattice
CitationCerra, M.; Fargas, G.; Roa, J.J. Characterization study of an oxide film layer produced under CO2/steam atmospheres on two different maraging steel grades. "Metals", 1 Maig 2021, vol. 11, núm. 5, p. 1-24.
URIhttp://hdl.handle.net/2117/348616
DOI10.3390/met11050746
ISSN2075-4701
Publisher versionhttps://www.mdpi.com/2075-4701/11/5/746
Collections
Share: