Architecture and performance of the KM3NeT front-end firmware 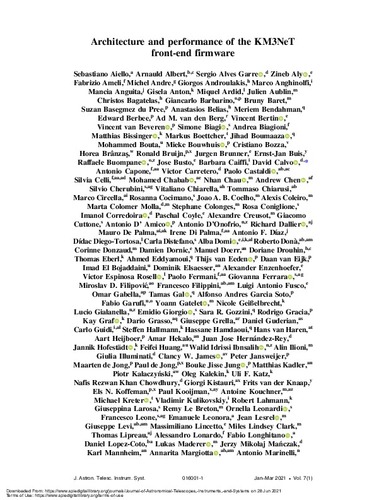 Androulakis, Giorgos
Anghinolfi, Marco
Anguita, M.
Anton, Gisela
Document typeArticle
PublisherInternational Society for Photo-Optical Instrumentation Engineers (SPIE)
Rights accessOpen Access
Abstract
The KM3NeT infrastructure consists of two deep-sea neutrino telescopes being deployed in the Mediterranean Sea. The telescopes will detect extraterrestrial and atmospheric neutrinos by means of the incident photons induced by the passage of relativistic charged particles through the seawater as a consequence of a neutrino interaction. The telescopes are configured in a three-dimensional grid of digital optical modules, each hosting 31 photomultipliers. The photomultiplier signals produced by the incident Cherenkov photons are converted into digital information consisting of the integrated pulse duration and the time at which it surpasses a chosen threshold. The digitization is done by means of time to digital converters (TDCs) embedded in the field programmable gate array of the central logic board. Subsequently, a state machine formats the acquired data for its transmission to shore. We present the architecture and performance of the front-end firmware consisting of the TDCs and the state machine
CitationAiello, S. [et al.]. Architecture and performance of the KM3NeT front-end firmware. "Journal of Astronomical Telescopes, Instruments, and Systems", 1 Gener 2021, vol. 7, núm. 1, p. 016001:1-016001:24.
URIhttp://hdl.handle.net/2117/347977
DOI10.1117/1.JATIS.7.1.016001
ISSN2329-4221
Publisher versionhttps://www.spiedigitallibrary.org/journals/Journal-of-Astronomical-Telescopes-Instruments-and-Systems/volume-7/issue-01/016001/Architecture-and-performance-of-the-KM3NeT-front-end-firmware/10.1117/1.JATIS.7.1.016001.full?SSO=1
Collections
Share: