Study on asymmetry concentration of mixed oil in products pipeline 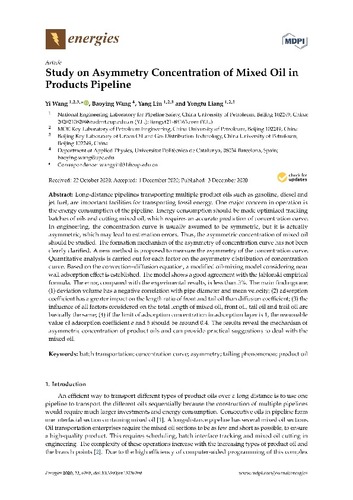 Liu, Yang
Liang, Yongtu
Document typeArticle
Rights accessOpen Access
Abstract
Long-distance pipelines transporting multiple product oils such as gasoline, diesel and jet fuel, are important facilities for transporting fossil energy. One major concern in operation is the energy consumption of the pipeline. Energy consumption should be made optimized tracking batches of oils and cutting mixed oil, which requires an accurate prediction of concentration curve. In engineering, the concentration curve is usually assumed to be symmetric, but it is actually asymmetric, which may lead to estimation errors. Thus, the asymmetric concentration of mixed oil should be studied. The formation mechanism of the asymmetry of concentration curve has not been clearly clarified. A new method is proposed to measure the asymmetry of the concentration curve. Quantitative analysis is carried out for each factor on the asymmetry distribution of concentration curve. Based on the convection–diffusion equation, a modified oil-mixing model considering near wall adsorption effect is established. The model shows a good agreement with the Jablonski empirical formula. The error, compared with the experimental results, is less than 5%. The main findings are: (1) deviation volume has a negative correlation with pipe diameter and mean velocity; (2) adsorption coefficient has a greater impact on the length ratio of front and tail oil than diffusion coefficient; (3) the influence of all factors considered on the total length of mixed oil, front oil, tail oil and trail oil are basically the same; (4) if the limit of adsorption concentration in adsorption layer is 1, the reasonable value of adsorption coefficient a and b should be around 0.4. The results reveal the mechanism of asymmetric concentration of product oils and can provide practical suggestions to deal with the mixed oil.
CitationWang, Y. [et al.]. Study on asymmetry concentration of mixed oil in products pipeline. "Energies", 3 Desembre 2020, vol. 13, núm. 23, p. 6398:1-6398:24.
URIhttp://hdl.handle.net/2117/347868
DOI10.3390/en13236398
ISSN1996-1073
Publisher versionhttps://www.mdpi.com/1996-1073/13/23/6398
Collections
Share: