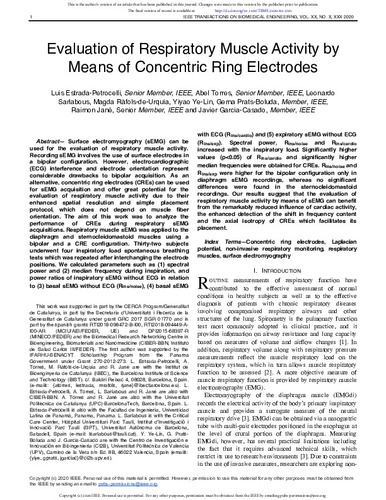 Except where otherwise noted, content on this work is licensed under a Creative Commons license : Attribution-NonCommercial-NoDerivs 3.0 Spain
Abstract
Surface electromyography (sEMG) can be used for the evaluation of respiratory muscle activity. Recording sEMG involves the use of surface electrodes in a bipolar configuration. However, electrocardiographic (ECG) interference and electrode orientation represent considerable drawbacks to bipolar acquisition. As an alternative, concentric ring electrodes (CREs) can be used for sEMG acquisition and offer great potential for the evaluation of respiratory muscle activity due to their enhanced spatial resolution and simple placement protocol, which does not depend on muscle fiber orientation. The aim of this work was to analyze the performance of CREs during respiratory sEMG acquisitions. Respiratory muscle sEMG was applied to the diaphragm and sternocleidomastoid muscles using a bipolar and a CRE configuration. Thirty-two subjects underwent four inspiratory load spontaneous breathing tests which was repeated after interchanging the electrode positions. We calculated parameters such as (1) spectral power and (2) median frequency during inspiration, and power ratios of inspiratory sEMG without ECG in relation to (3) basal sEMG without ECG (Rins/noise), (4) basal sEMG with ECG (Rins/cardio) and (5) expiratory sEMG without ECG (Rins/exp). Spectral power, Rins/noise and Rins/cardio increased with the inspiratory load. Significantly higher values (p <; 0.05) of Rins/cardio and significantly higher median frequencies were obtained for CREs. Rins/noise and Rins/exp were higher for the bipolar configuration only in diaphragm sEMG recordings, whereas no significant differences were found in the sternocleidomastoid recordings. Our results suggest that the evaluation of respiratory muscle activity by means of sEMG can benefit from the remarkably reduced influence of cardiac activity, the enhanced detection of the shift in frequency content and the axial isotropy of CREs which facilitates its placement.
CitationEstrada, L.; Torres, A.; Jane, R. Evaluation of respiratory muscle activity by means of concentric ring electrodes. "IEEE transactions on biomedical engineering", Març 2021, vol. 68, núm. 3, p. 1005-1014.
URIhttp://hdl.handle.net/2117/347516
DOI10.1109/TBME.2020.3012385
ISSN0018-9294
Publisher versionhttps://ieeexplore.ieee.org/document/9151296
Collections
Share: