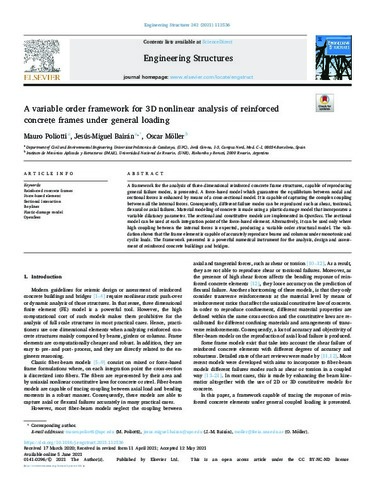 Moller, O.
Document typeArticle
PublisherElsevier
Rights accessOpen Access
Abstract
A framework for the analysis of three-dimensional reinforced concrete frame structures, capable of reproducing general failure modes, is presented. A force-based model which guarantees the equilibrium between nodal and sectional forces is enhanced by means of a cross-sectional model. It is capable of capturing the complex coupling between all the internal forces. Consequently, different failure modes can be reproduced such as shear, torsional, flexural or axial failures. Material modeling of concrete is made using a plastic-damage model that incorporates a variable dilatancy parameter. The sectional and constitutive models are implemented in OpenSees. The sectional model can be used at each integration point of the force-based element. Alternatively, it can be used only where high coupling between the internal forces is expected, producing a variable order structural model. The validation shows that the frame element is capable of accurately reproduce beams and columns under monotonic and cyclic loads. The framework presented is a powerful numerical instrument for the analysis, design and assessment of reinforced concrete buildings and bridges.
CitationPoliotti, M.; Bairan, J.M.; Moller, O. A variable order framework for 3D nonlinear analysis of reinforced concrete frames under general loading. "Engineering structures", Setembre 2021, vol. 242, p. 112536:1-112536:12.
URIhttp://hdl.handle.net/2117/347397
DOI10.1016/j.engstruct.2021.112536
ISSN0141-0296
Publisher versionhttps://www.sciencedirect.com/science/article/pii/S0141029621006866
Collections
Share: