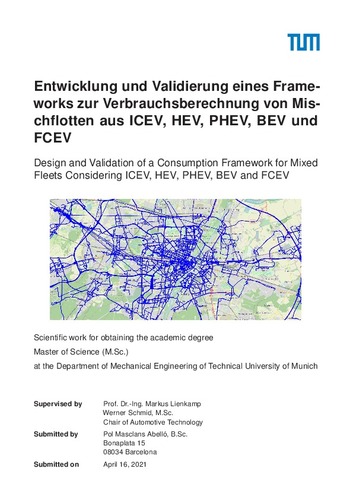 CovenanteeTechnische Universität München
Document typeMaster thesis
Rights accessOpen Access
Abstract
In this work a consumption simulation framework for ICEV, HEV, PHEV, BEV and FCEV is developed, tested and validated with real consumption data. The framework is based on FASTSim, a simulation tool created by the NREL to efficiently and accurately compare different vehicle powertrains. Two different versions are developed, one of them is oriented to a simulation using GPS recorded speed profiles, while the second one allows to simulate the fuel consumption of a trip just by introducing its origin and destination coordinates. For the testing and validation of the framework 30 different real vehicles from two vehicle fleets are simulated, with a total driving distance of 191 680 km. The version for estimating the consumption of recorded trips is validated using real consumption data of 103 trips driven by one of the simulated vehicles, for which its real consumption data was recorded using the Mercedes Pro platform. Additionally, a validation is carried out for each of the simulated vehicles using the available consumption rates of Spritmonitor. This version accounts for both road grade and additional masses. A comparative study of the influence of the payload masses of transporters in the overall fuel consumption is included in the work, showing that a 600 kg payload increases the fuel consumption by an average of 10%. The version for simulating non-recorded trips is based in a consumption curve derived using real drive data. A series of speed bins are created and simulated individually for each vehicle, so the approach accounts for individual vehicle characteristics and even extra mass from payloads. A routing engine is used to determine the optimal route between the origin and destination and provide the model with the necessary data to estimate the consumption rate of the trip. This approach has similar or even better accurateness compared to the alternatives found in the literature and it is particularly well suited for performing large number of simulations
SubjectsFreight and freightage -- Management -- Automation, Electric automobiles -- Fuel consumption -- Computer simulation, Traffic flow -- (Munich, Germany) -- Mathematical models, Transport de mercaderies -- Direcció i administració -- Automatització, Automòbils elèctric -- Consum de combustible -- Simulació per ordinador, Circulació -- (Munic, Alemanya) -- Models matemàtics
DegreeMÀSTER UNIVERSITARI EN ENGINYERIA INDUSTRIAL (Pla 2014)
Location
1: Tal 50, 80331 München, Alemanya
URIhttp://hdl.handle.net/2117/347198
Collections
Share: