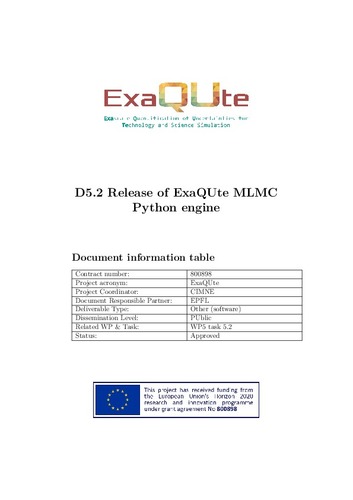 Document typeResearch report
Rights accessOpen Access
ProjectExaQUte - EXAscale Quantification of Uncertainties for Technology and Science Simulation (EC-H2020-800898)
Abstract
In this deliverable, the ExaQUte xmc library is introduced. This report is meant to serve as a supplement to the publicly release of the library. In the following sections, the ExaQUte xmc library is described along with its current and future capabilities. The structure of the library, along with its dynamic import mechanism, are described using samples of code. The algorithms behind the example files supplied with the public release are explained in detail as well.
CitationAmela, R. [et al.]. ExaQUte: D5.2 Release of ExaQUte MLMC Python engine. 2019. DOI 10.23967/exaqute.2021.2.024.
URIhttp://hdl.handle.net/2117/347127
DOI10.23967/exaqute.2021.2.024
URL other repositoryhttps://www.scipedia.com/public/Table_Soriano_2019c
Collections
Share: