Development of a heated 5-hole probe for aircraft applications 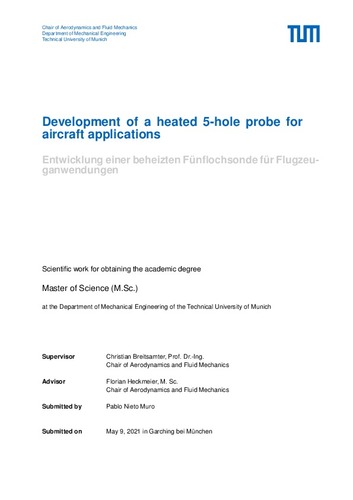 ; Heckmeier, Florian; Breitsamter, Christian
CovenanteeTechnische Universität München; Vectoflow GmbH
Document typeMaster thesis
Rights accessOpen Access
Abstract
Multi-hole probes can measure air speed and direction by translating the pressures read at a series of openings located on their surface, called pressure ports. The blockage of these ports can lead to the corruption of the system readings. When one of these probes is installed in an aircraft, blockage may occur due to the accumulation of ice crystals on the probe surface driven by a phenomenon called icingor ice accretion. Icing occurs when subfreezing liquid water particles suspended in the air solidify aftercoming in contact with the aircraft surface. A common way to protect velocity measurement systems like multi-hole probes from that problem is adding a heating system that increases the probe surface temperature. This thesis studies the heat transfer problem between the heating system of a straight 5-hole probe and the environment. The heat is generated by a resistive element mounted near the front of the probe and it is dissipated to an axial airflow. The problem is approached in three different ways. First, the heat convection between the probe surface and the airflow is modeled analytically. Then, aCFD model of the system is developed. The conduction problem between the elements in the probe is better understood with this second model. In the end, the heated probe is brought to a wind tunnel facility in order to study the real behavior of the system. The test results are used to evaluate the predictions ofthe models and to evaluate the icing protection provided by the heating system.
SubjectsFluid-structure interaction -- Aerodynamics -- Mathematical models, Sensor networks -- Aviation -- Measurement, Aviation -- Safety appliances -- Design and construction, Interacció fluid-estructura -- Aerodinàmica -- Models matemàtics, Xarxes de sensors -- Aviació -- Mesurament, Aviació -- Aparells de seguretat -- Disseny i construcció
DegreeMÀSTER UNIVERSITARI EN ENGINYERIA INDUSTRIAL (Pla 2014)
URIhttp://hdl.handle.net/2117/347118
Collections
Share: