Dynamics of slow and fast landslides 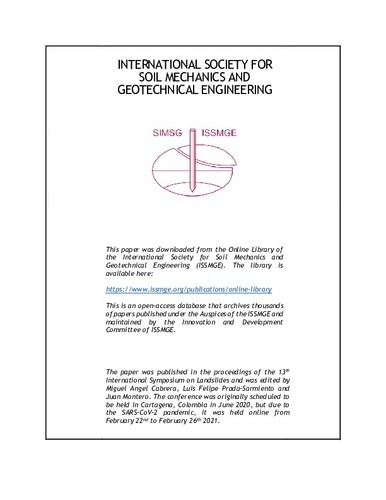 Document typeConference report
Rights accessOpen Access
All rights reserved. This work is protected by the corresponding intellectual and industrial property rights. Without prejudice to any existing legal exemptions, reproduction, distribution, public communication or transformation of this work are prohibited without permission of the copyright holder
Abstract
The paper discusses some factors that control the shearing soil behaviour and the dynamics of landslides: strain-, strain rate-, and temperature effects. The strain rate effect on residual strength is discussed through shearing tests reported in the literature on saturated samples at velocities ranging from 10-5 mm/min to 104 mm/min. Such range covers from very slow to very rapid landslides according to landslide classification. The analysis of available data is presented and provides a framework which helps to define the constitutive law and phenomena further selected for the landslide analyses. Some recent experimental published works are also discussed to show the temperature effect on shear strength. It is concluded that temperature effects are strain-rate dependent. The available data on that is limited and it may have a relevant effect in shallow landslides in which the sliding surface suffers the influence of weather induced temperature changes. The second part of the article focusses on the analysis of landslides including several factors affecting the available shearing strength of the soils involved in instabilities. The motion from triggering to the final re-established equilibrium of slow and rapid landslides is analyzed through academic and simple examples as well as documented real cases. Under some hypotheses to simplify the problems, governing equations are solved analytically or in a simple numerical way to facilitate the discussion and to perform sensitivity analyses. With the interest of evaluating more realistic cases, some simplified hypotheses are relaxed and complex geometries and conditions are taken into account through numerical modeling. The material point method is selected. The MPM numerical codes, recently developed, can deal with strain- and strain-rate dependent shearing strength and include coupled effects likely developed during motion in landslides. Strain-softening of shear strength causing progressive phenomenon is firstly discussed not only because of its effect on triggering first failures, but also for the estimation of landslide run-out. Compound landslides are specifically analyzed to discuss the progressive phenomena developed along internal shearing planes. Peak and residual strength envelopes control the landslide acceleration. The magnitude of the strength drop correlates well with the run-out. Including a strain rate hardening component to the strength allows the assessment of creeping landslides. Weakening phenomena inducing the acceleration of landslides are not directly included as an intrinsic feature. The loss of residual strength that may lead to a rapid landslide is explained by invoking thermal water pressurization. Both effects, strain rate hardening and hydro-thermal coupled weakening, are probably present during motion. Soil properties, landslide features, and external conditions will determine the landslide motion. This interaction is discussed in terms of run-out and velocity of landslides subjected to static conditions, as well as seismic actions.
CitationPinyol, N.M.; Alvarado, M.; Garcia, L. Dynamics of slow and fast landslides. A: International Symposium on Landslides. "International Society for Soil Mechanics and Geotechnical Engineering Online Library: 13th International Symposium on Landslides ( XIII ISL)". 2020, p. 1-30.
URIhttp://hdl.handle.net/2117/346907
Publisher versionhttps://www.issmge.org/publications/publication/dynamics-of-slow-and-fast-landslides
Collections
Share: