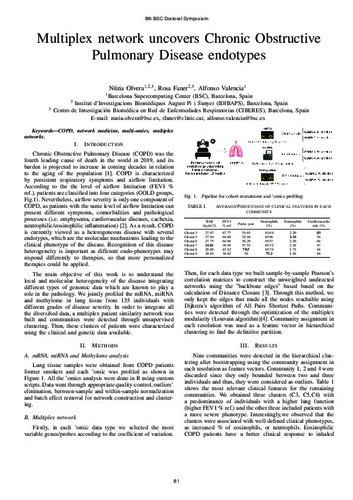 Document typeConference report
PublisherBarcelona Supercomputing Center
Rights accessOpen Access
All rights reserved. This work is protected by the corresponding intellectual and industrial property rights. Without prejudice to any existing legal exemptions, reproduction, distribution, public communication or transformation of this work are prohibited without permission of the copyright holder
Abstract
Chronic Obstructive Pulmonary Disease (COPD) was the fourth leading cause of death in the world in 2019, and its burden is projected to increase in coming decades in relation to the aging of the population [1]. COPD is characterized by persistent respiratory symptoms and airflow limitation. According to the the level of airflow limitation (FEV1 % ref.), patients are classified into four categories (GOLD groups, Fig.1). Nevertheless, airflow severity is only one component of COPD, as patients with the same level of airflow limitation can present different symptoms, comorbidities and pathological processes (i.e. emphysema, cardiovascular diseases, cachexia, neutrophilic/eosinophilic inflammation) [2]. As a result, COPD is currently viewed as a heterogeneous disease with several endotypes, which are the molecular mechanisms leading to the clinical phenotype of the disease. Recognition of this disease heterogeneity is important as different endo-phenotypes may respond differently to therapies, so that more personalized therapies could be applied. The main objective of this work is to understand the local and molecular heterogeneity of the disease integrating different types of genomic data which are known to play a role in the pathology. We jointly profiled the mRNA, miRNA and methylome in lung tissue from 135 individuals with different grades of disease severity. In order to integrate all the diversified data, a multiplex patient similarity network was built and communities were detected through unsupervised clustering. Then, these clusters of patients were characterized using the clinical and genetic data available.
CitationOlvera, N.; Faner, R.; Valencia, A. Multiplex network uncovers chronic obstructive pulmonary disease endotypes. A: . Barcelona Supercomputing Center, 2021, p. 81-83.
URIhttp://hdl.handle.net/2117/346625
Collections
Share: