Analysis of hybrid genomes in the candida parapsilosis clade 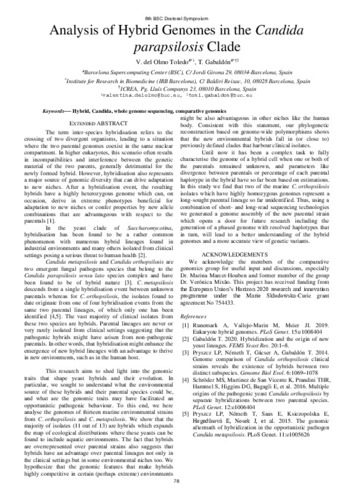 Show full item record
del Olmo Toledo, V.
Gabaldón, T.
Document typeConference report
PublisherBarcelona Supercomputing Center
Rights accessOpen Access
All rights reserved. This work is protected by the corresponding intellectual and industrial property rights. Without prejudice to any existing legal exemptions, reproduction, distribution, public communication or transformation of this work are prohibited without permission of the copyright holder
Abstract
The term inter-species hybridisation refers to the crossing of two divergent organisms, leading to a situation where the two parental genomes coexist in the same nuclear compartment. In higher eukaryotes, this scenario often results in incompatibilities and interference between the genetic material of the two parents, generally detrimental for the newly formed hybrid. However, hybridisation also represents a major source of genomic diversity that can drive adaptation to new niches. After a hybridisation event, the resulting hybrids have a highly heterozygous genome which can, on occasion, derive in extreme phenotypes beneficial for adaptation to new niches or confer properties by new allele combinations that are advantageous with respect to the parentals [1]. In the yeast clade of Saccharomycotina, hybridisation has been found to be a rather common phenomenon with numerous hybrid lineages found in industrial environments and many others isolated from clinical settings posing a serious threat to human health [2]. Candida metapsilosis and Candida orthopsilosis are two emergent fungal pathogens species that belong to the Candida parapsilosis sensu lato species complex and have been found to be of hybrid nature [3]. C. metapsilosis descends from a single hybridisation event between unknown parentals whereas for C. orthopsilosis, the isolates found to date originate from one of four hybridisation events from the same two parental lineages, of which only one has been identified [4,5]. The vast majority of clinical isolates from these two species are hybrids. Parental lineages are never or very rarely isolated from clinical settings suggesting that the pathogenic hybrids might have arisen from non-pathogenic parentals. In other words, that hybridisation might enhance the emergence of new hybrid lineages with an advantage to thrive in new environments, such as in the human host. This research aims to shed light into the genomic traits that shape yeast hybrids and their evolution. In particular, we sought to understand what the environmental source of these hybrids and their parental species could be, and what are the genomic traits may have facilitated an opportunistic pathogenic behaviour. To this end, we here analyse the genomes of thirteen marine environmental strains from C. orthopsilosis and C. metapsilosis. We show that the majority of isolates (11 out of 13) are hybrids which expands the map of ecological distributions where these yeasts can be found to include aquatic environments. The fact that hybrids are overrepresented over parental strains also suggests that hybrids have an advantage over parental lineages not only in the clinical settings but in some environmental niches too. We hypothesize that the genomic features that make hybrids highly competitive in certain (perhaps extreme) environments might be also advantageous in other niches like the human body. Consistent with this statement, our phylogenetic reconstruction based on genome-wide polymorphisms shows that the new environmental hybrids fall in (or close to) previously defined clades that harbour clinical isolates. Until now it has been a complex task to fully characterise the genome of a hybrid cell when one or both of the parentals remained unknown, and parameters like divergence between parentals or percentage of each parental haplotype in the hybrid have so far been based on estimations. In this study we find that two of the marine C. orthopsilosis isolates which have highly homozygous genomes represent a long-sought parental lineage so far unidentified. Thus, using a combination of short- and long-read sequencing technologies we generated a genome assembly of the new parental strain which opens a door for future research including the generation of a phased genome with resolved haplotypes that in turn, will lead to a better understanding of the hybrid genomes and a more accurate view of genetic variants.
CitationDel Olmo Toledo, V.; Gabaldón, T. Analysis of hybrid genomes in the candida parapsilosis clade. A: . Barcelona Supercomputing Center, 2021, p. 78-80.
URIhttp://hdl.handle.net/2117/346624
Collections
Share: