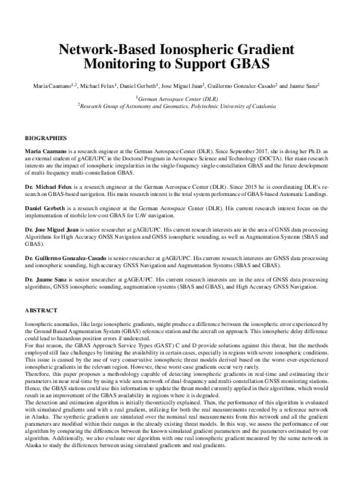 Except where otherwise noted, content on this work is licensed under a Creative Commons license : Attribution-NonCommercial-NoDerivs 3.0 Spain
Abstract
Ionospheric anomalies, like large ionospheric gradients, might produce a difference between the ionospheric error experienced bythe Ground Based Augmentation System (GBAS) reference station and the aircraft on approach. This ionospheric delay differencecould lead to hazardous position errors if undetected.For that reason, the GBAS Approach Service Types (GAST) C and D provide solutions against this threat, but the methodsemployed still face challenges by limiting the availability in certain cases, especially in regions with severe ionospheric conditions.This issue is caused by the use of very conservative ionospheric threat models derived based on the worst-ever-experiencedionospheric gradients in the relevant region. However, these worst-case gradients occur very rarely.Therefore, this paper proposes a methodology capable of detecting ionospheric gradients in real-time and estimating theirparameters in near real-time by using a wide area network of dual-frequency and multi-constellation GNSS monitoring stations.Hence, the GBAS stations could use this information to update the threat model currently applied in their algorithms, which wouldresult in an improvement of the GBAS availability in regions where it is degraded.The detection and estimation algorithm is initially theoretically explained. Then, the performance of this algorithm is evaluatedwith simulated gradients and with a real gradient, utilizing for both the real measurements recorded by a reference networkin Alaska. The synthetic gradients are simulated over the nominal real measurements from this network and all the gradientparameters are modified within their ranges in the already existing threat models. In this way, we assess the performance of ouralgorithm by comparing the differences between the known simulated gradient parameters and the parameters estimated by ouralgorithm. Additionally, we also evaluate our algorithm with one real ionospheric gradient measured by the same network inAlaska to study the differences between using simulated gradients and real gradients.
CitationCaamaño, M. [et al.]. Network-based ionospheric gradient monitoring to support GBAS. A: International Technical Meeting of The Satellite Division of the Institute of Navigation. "32nd International Technical Meeting of the Satellite Division of The Institute of Navigation (ION GNSS+ 2019); Miami, Florida, USA: september 16-20, 2019: proceedings". Manassas, Virginia: ION Publications (The Institute of navigation), 2019, p. 2888-2902. ISBN 9781510895850. DOI 10.33012/2019.16926.
URIhttp://hdl.handle.net/2117/346619
DOI10.33012/2019.16926
ISBN9781510895850
Publisher versionhttps://www.ion.org/publications/abstract.cfm?articleID=16926
Collections
Share: