The OpenMP API for high integrity systems: Moving responsibility from users to vendors 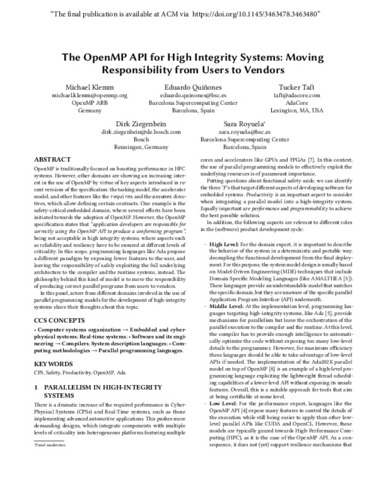 Document typeArticle
PublisherAssociation for Computing Machinery
Rights accessOpen Access
ProjectAMPERE - A Model-driven development framework for highly Parallel and EneRgy-Efficient computation supporting multi-criteria optimisation (EC-H2020-871669)
Abstract
OpenMP is traditionally focused on boosting performance in HPC systems. However, other domains are showing an increasing interest in the use of OpenMP by virtue of key aspects introduced in recent versions of the specification: the tasking model, the accelerator model, and other features like the requires and the assumes directives, which allow defining certain contracts. One example is the safety-critical embedded domain, where several efforts have been initiated towards the adoption of OpenMP. However, the OpenMP specification states that "application developers are responsible for correctly using the OpenMP API to produce a conforming program", being not acceptable in high integrity systems, where aspects such as reliability and resiliency have to be ensured at different levels of criticality. In this scope, programming languages like Ada propose a different paradigm by exposing fewer features to the user, and leaving the responsibility of safely exploiting the full underlying architecture to the compiler and the runtime systems, instead. The philosophy behind this kind of model is to move the responsibility of producing correct parallel programs from users to vendors. In this panel, actors from different domains involved in the use of parallel programming models for the development of high-integrity systems share their thoughts about this topic.
CitationKlemm, M. [et al.]. The OpenMP API for high integrity systems: Moving responsibility from users to vendors. "Ada Letters", Desembre 2020, vol. 40, núm. 2, p. 48-50.
URIhttp://hdl.handle.net/2117/346447
DOI10.1145/3463478.3463480
ISSN1094-3641
Publisher versionhttps://doi.org/10.1145/3463478.3463480
Collections
Share: